The HNL returns after a brief break and the first week shined a light on how the season may be played out.

Dinamo Zagreb began their defense of the title on Sunday with a 6-0 win over NK Lokomotiva.

If this match showed anything, it showed that Lokomotiva is not the same team that finished the season with dramatic second place clinching.

Lokomotiva may have fallen victim to the vicious cycle that plagues many teams in the HNL; the money-making fire sale.

Lokosi have offloaded several key players, many to the benefit of Dinamo. Lirim Kastrati faced his former team Sunday as well as Kristijan Jakić, but Lokomotiva was also without 18 players that were members of the squad the previous season. The thrashing by Dinamo exposed the inexperience of the latest rendition of Lokomotiva and it does not bode well for their upcoming European campaign.

Dinamo’s Lovro Majer scored in the sixth and 27th minutes, putting his team up 2-0 before adding an assist to his name in the 50th minute from Mario Gavranović‘s goal. Mislav Oršić and Luka Ivanušec racked up goals in the 78th and 79th minutes, respectively before Karlo Andrić topped off the 6-0 win in the 89th minute.

Several debutantes were on display in the match including Dinamo’s Welshman Robbie Burton, who joined from Arsenal as well as former Croatian international Dario Šimić’s son, Roko Šimić, who entered the match for Lokomotiva as a substitute.

Though credit to Dinamo, Lokosi defense and goalkeeping left much to be desired and will need to be improved before their first Champions League match later in August.

NK Istra 1961 is another team that has suffered the fate of depletion, but for a slightly different reason.

There was no fire sale at Istra, but more of a mass exiodus.

NK Istra 1961 is currently without a coach, a club president, or any real first-team talent on its roster as numerous players refused to resign contracts with the club that struggled to pay players at all, despite earning the chance to play another round in the Prva Liga after winning the promotion/relegation playoffs two weeks ago.

However, Istra put up a valiant fight against Hajduk Split at Poljud this weekend despite losing 2-0.

Istra had their opportunities to score, but failed to capitalize on even the most opportune moments. The also managed to keep Hajduk scoreless through more than 70 minutes before Kristian Dimitrov scored a header in the 72nd minute. Argument could be made for an offside call, but the goal stood and gave Hajduk the confidence needed to find a second in the 83rd minute thanks to Adam Gyurcso. The goal was assisted by Darko Todorović, who made his debut for Split and is on loan from RB Salzburg.

Hajduk Split is still under the leadership of Igor Tudor, but his days may be numbered as the head of the Bili. Rumors have been swirling that Andrea Pirlo, Juventes’ new manager, has pegged Tudor as a suitable component of his coaching staff. Reports have surfaced that Tudor has accepted a position with the Italian giants, and more information will be reported as the story develops. Tudor spent eight seasons with Juventes in his playing career.

HNK Rijeka kept up with the top top of the table with a 2-1 victory over newcomers HNK Šibenik, despite going down 1-0 early in the match.

Marko Bulat scored Šibenik’s first Prva Liga goal since 2012 in the ninth minute. Rijeka struggled to find an equalizer, but eventually got the job done in the 84th minute with a goal from Sterling Yateke. Robert Murić scored the game winner in the 90th minute for Rijeka.

The season kicked off on Friday with a match featuring Varaždin playing hosts to HNK Gorica. The match was all Gorica, with the exception of the wunderstrike performed by Varaždin’s Neven Đurasek (in all its glory, including his pathetic attempt at a knee-sliding celebration).  Gorica took the match with the score of 5-1. After scoring their first goal in the 38th minute, and allowing the equalizer in the 62nd, Gorica opened the floodgates and scored four more goals in nine minutes, three of which came on or after the full 90 minutes.

Despite the onslaught, a moment of silence should be noted in acknowledgement of Leon Benko‘s impressive overhead kick, which narrowly missed the net in the second half. Benko, a living legend at age 36, is still putting in the heart and effort to try such a feat for his boyhood club 17 years after he made his debut for the Varaždin (NK Varteks).

NK Osijek played to a disappointing scoreless (and lifeless) draw at Gradski Vrt on Saturday. 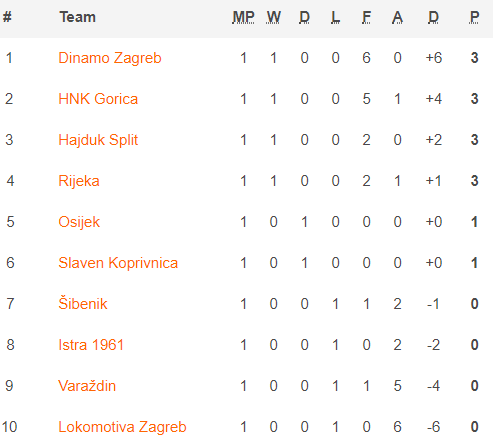