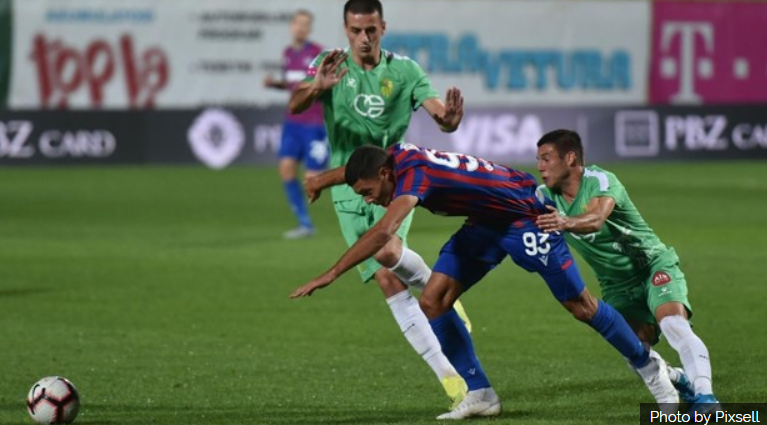 Hajduk Split still maintain sole possession of the top of the table, but the Bili fumbled a few points on Sunday during a tough trip to Pula.

Aldo Drosina hosted the match between Pula and Hajduk, which finished 1-1 after a lackluster performance by both sides. Hajduk opened the scoring with Mijo Caktaš scoring his fourth goal of the season. But Istra’s Stefan Lončar was able to equalize late in the game with an 80th minute goal, his first goal of the season.

Despite not being named on the score sheet, Mario Čuže stood out with several key plays and near-goals. Čuže nearly won it for Istra, but was denied late in the match. Čuže, after scoring six goals early in the season, has gone quite as of late, but the future still looks bright for the young Croatian.

Dinamo Zagreb is creeping up behind Hajduk, not only one point behind with a game in hand. Dinamo soundly beat NK Lokomotiva at Kranjčevićeva on Friday evening 4-0 with goals coming from Damion Kadzior, Dani Olmo, Mislav Oršić and Mario Gavranović.

Former Dinamo star, Sammir, started and played 90 minutes against his former club, but did not stand out and contributed little. Reports from Zagreb state Sammir was “nervous” to face Dinamo which possible subdued his play.

The match will also be looked at as a key warm up for Tuesday’s meeting with English side Manchester City in the group stages of the Champions League. The match will be played in Manchester and City’s Etihad Stadium on Tuesday.

HNK Rijeka is also doing what is needed to be done to keep pace with the top of the table. Rijeka traveled to Varaždin and brought home all three points off the heels of a 2-0 victory. Joao Escoval scored his first goal with the club to give Rijeka a 1-0. Tibor Halilović doubled the lead, giving Rijeka the ultimate 2-0 win.

A week after dismissing their manager, Dinamo Skender, Osijek recorded a 4-0 beating of Slaven Koprivnica. Slaven was without a key player on the weekend as striker Muzafer Ejupi. Ejupi was reportedly arrested and treated for injuries after a brawl several days before the match. Several reports allege Ejupi was involved in an altercation with a middle-aged man regarding a parking spot. The man struck Ejupi several times with a pipe, causing facial and head lacerations. Charges are pending. According to a club statement, Slaven Belupo have not yet taken action on the player.

Winning for HNK Gorica has become as routine as losing is for NK Inter Zaprešić. Gorica recorded a 2-0 win away to Inter on Sunday and remain in fifth place. 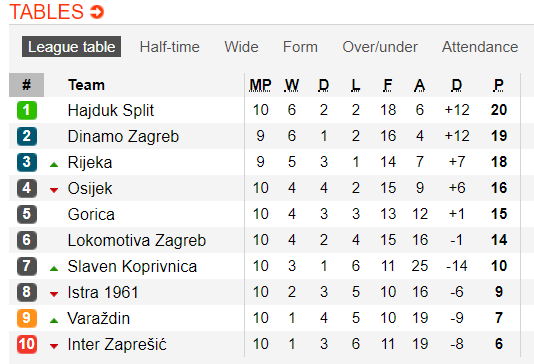