The circus made a stop in Split Sunday while Hajduk hosted Slaven Belupo.

A series of odd events led to a 2-0 Hajduk victory, leaving the final score as a secondary talking point.

Slaven had some complaints after no call was made when Hajduk goalkeeper smothered the ball at least a yard outside of the penalty area.

But this was only the build up to the ridiculous scene that can only be found in the Prva Liga.

Hajduk goalkeeper Josip Posavec distributed an errant ball which was found at the feet of Nemanja Glavčić roughly 40 yards from goal. Glavčić had the wherewithal to catch Posevac off his line and lofted a long distance shot over the keeper’s head. However a desperate Posavec was able to get a touch on the ball and push it off the post to save the goal. Apparently the Slaven players didn’t get the memo.

Glavčić was engulfed with a celebration near the middle of the pitch thinking he had scored the tying goal while the Slaven goalkeeper, Antonio Ježina made a sprint tot he sideline to celebrate on the bench, all while the ball was still alive and in control by Hajduk.

An uncontested counter attack allowed Josip Juranović to score one of the easiest goals of his career, despite being pursued by a helpless Ježina who at least made an attempt to chase the ball down from the bench.

Glavčić was quoted after the match, telling the media he blamed his “great desire to score” against Hajduk on his misjudgment of the non-goal.

The victory keeps Hajduk in the title race, one point behind Dinamo Zagreb.

Dinamo Zagreb secured a close victory of Osijek on Sunday at Maksimir. Dinamo’s goal came off a quick throw in that caught Osijek sleeping, leaving a massive space in front of goal for Bruno Petković to calmly slide a pass to Damian Kadzior who scored the goal.

The match appeared to end as a 1-1 draw, but Gorica did everything they could to keep their win streak alive. Matija Dvorneković scored Gorica’s game winner in the 92nd minute to secure the win.

The match was Rijeka’s first loss since the resignation of Igor Biščan. Simon Rožman has been at the helm since September 23.

Varaždin and Inter Zaprešić kicked off the weekend with a Friday match, which ended in 1-0 win for Inter. 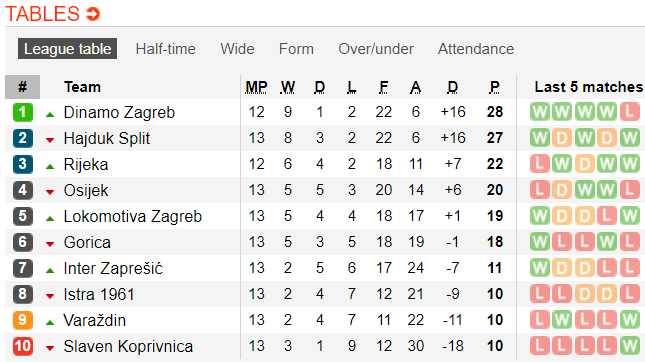