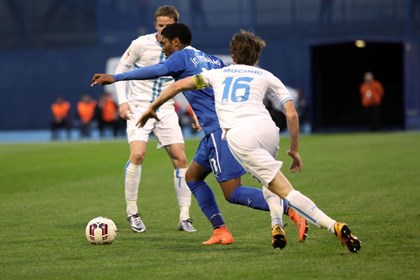 Dinamo Zagreb has secured a five-point lead at the top of the table after defeating Rijeka at Maksimir 3-0 on Sunday.

The two sides contested for the top spot over the weekend, but Rijeka was unable to match the performance put on by Dinamo and suffered their first defeat of the season. Rijeka was the last club to remain undefeated until Sunday.

With barely 40 percent of the possession, Rijeka did little to challenge Dinamo and created little offense to speak of.

Dinamo’s forwards on the other hand performed much better, attempting eight shots, scoring with three, but did not break through on the score sheet until the second 45 minutes.

El Arbi Hillel Soudani started off the scoring for the Modri in the 64th minute with a delightful goal to beat Ivan Vargić.

Soudani timed his run perfectly and received the ball from Domagoj Antolić and beat Vargić as he came out to attack the ball. Soudani calmly sent the ball into the side netting.

Dinamo’s second goal came from Leonardo Sigali, thanks to a powerful header sent in from a corner kick to make the score 2-0.

Rijeka had little hope of mounting a comeback, but Soudani dashed whatever aspirations Rijeka had left when se scored the third goal of the game in the 90th minute.

Vargić and his defenders seemed to be wasting time until the whistle blew and made an errant pass that gave the ball to Soudani inside the penalty area.

Soudani made Vargić pay for his uninterested and ambiguous pass and scored in similar fashion as his first goal. 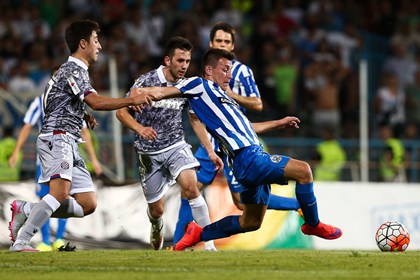 Hajduk Split suffered a devastating defeat at the hands of NK Lokomotiva at Kranjčevićeva on Saturday and fall further behind the ranks of Dinamo and Rijeka.

Hajduk had lost several key players over the winter break, while Lokomotiva was building their reinforcements to ensure a strong finish int eh second half of the season.

The enforcements paid off as the Lokosi beat the Bili 2-1.

The match took place on abysmal conditions at Kranjčevićeva but was able to continue despite a proper field.

Eros Grezda scored his sixth goal of the season since his debut with the Lokosi in August.

The Albanian scored the opening tally in the 27th minute and almost assisted in doubling the lead in the 38th minute, but was denied the opportunity when Lovre Kalinić made a strong save against Ivan Fiolić’s shot from close range.

Despite being the better team on the field, Hajduk found themselves down by two goals after former Hajduk player Franko Andrijašević scored in the 53rd minute.

Hajduk was not without their chances, tallying 13 corner kicks in the match and finishing the day with seven shots and 61 percent of the possession.

The Bili did find themselves down a man for the final 15 minutes of the match after Tino-Sven Sušić was sent off for striking Herdi Prenga in the face. A total of nine yellow cards and one red card were issued in the match.

Lokomotiva made the best of their chances and were able to fight for three points against the Bili who remain in third place. 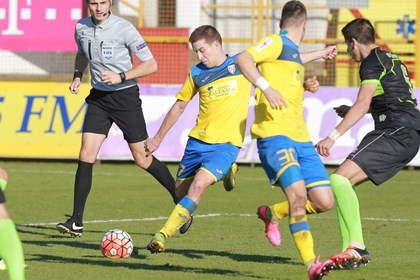 It was all Ilja Nestorovski all day on Saturday as the Macedonian scored his 14th and 15th goals of the season.

Both goals from Nestorovski came from skillful shots from outside the penalty area.

The first goal came after only 13 minutes of play and was lofted over Vanja Iveša’s head from 19 yards out.

Nestorovski scored in similar fashion in the 34th minute to make it 2-0 for the away team.

Istra cut the lead in half when Ante Repić scored in the 67th minute.

Nestorivski was transferred to Serie A side, Palermo for a bargain price of 500,000 euros, but will remain with NK Inter until the end of the season. 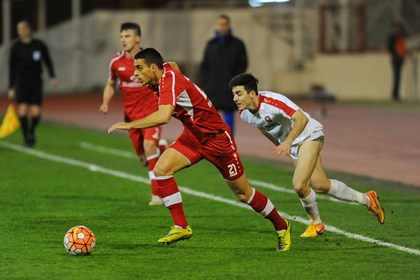 Draen Bagarić denied even a single point to NK Zagreb when they visited Split for the Mali Derbi over the weekend.

RNK Split took all three points with a 1-0 victory of the Poets who have all but secured their fate in the Driga Liga next season. 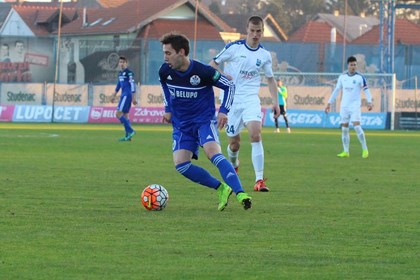 The city of Koprivnica has not been kind of Osijek over the years, and has continued its unwelcoming streak with another victory for the Pharmacists over Osijek at the City Stadium.

It has been since 2007 since the last time Osijek celebrated a win in Koprivnica, but they will have to keep waiting as Slaven has once again achieved three points with their 1-0 win on Sunday.

Filip Ozobić scored the lone goal of the game in the 38th minute to give Slaven an important three points.

The Pharmacists now sit four points clear of Osijek who rest uncomfortably in the relegation zone. 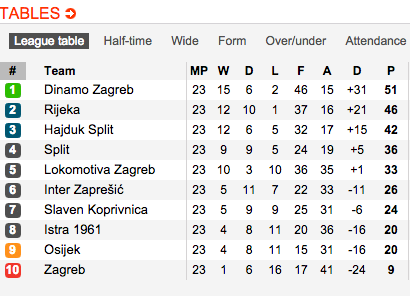