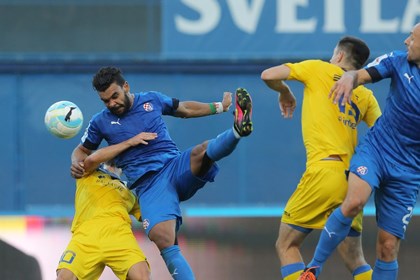 Another routine win for Dinamo puts them back on top of the table after Junior Fernandes and Soudani each knotted goals for the Modri.

The 2-1 win on Saturday came on the heels of a massive victory over Hajduk at Poljud on Wednesday. Two goals from Marko Rog and two from Junior Fernandes solidified a 4-0 thrashing of Hajduk by Dinamo. Dinamo took that momentum back to Maksimir where they earned three points with a 2-1 victory in front of 1,250 spectators. The attendance at Poljud on Wednesday? A lot more.

Ivan Blažević of Inter was able to score a consolation goal in the 90th minute, but the lone goal made no difference, leaving Inter winless through the first five matches of the season.

Dinamo is leading the table with 13 points (four wins, one draw) along with Rijeka, who is behind only on goal differential.

Dinamo will prepare for Tuesday’s Champion’s League play-off match against Red Bull Salzburg which kicks off at 2:45 EST.

Unconfirmed reports have surfaced that Marko Rog has been sold to Italy’s Serie A’s Napoli for 16 million euros. More information on this as it develops.

Hajduk Split was unable to overcome the 4-0 loss to Dinamo Wednesday and fought for 1-1 draw against the in-form Osijek side.

Hajduk took the lead in the 12th minute with a goal from Ante Erceg. Erceg scored from close range after missing his first attempt on net. He was able to keep his composure to line himself back up and score the match’s opening goal.

The lead was short lived however, thanks to Osijek’s quick response. Muzafer Ejupi scored on his debut for his new club after joining from Slaven Belupo on Thursday. Ejupi’s goal was scored from a similar distance as Erceg and easily beat goalkeeper Lovre Kalinić.

Eujpi was transferred to Osijek for a fee 350,000 euros, a record high transfer for Osijek.

Osijek remained the more dangerous team through the first half, with several more chances created from Ejupi and Gabrijel Boban. Aljoša Vojnović nearly had the game-winner in the 73rd minute, but was denied the opportunity when the Hajduk defense blocked the shot.

The match ended without a winner, and the teams were forced to split the points. Hajduk and Osijek remained tied on points, but Hajduk holds onto third place on goal differential. 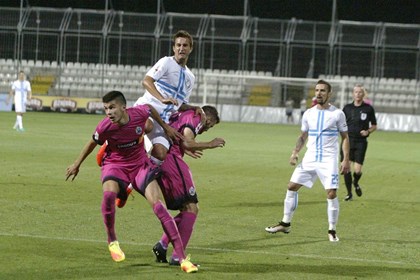 NK Lokomotiva was searching for their first win of the season entering he match against Rijeka on Saturday and ended the match still looking.

Rijeka defeated the Lokosi at Rujevica 1-0 thanks to a goal from Matej Mitrović. The goal from Mirtović came in the 11th minute and was scored off of a fierce header send in to Mitrović from a corner kick. Florentine Matel nearly doubled the lead two minutes later, but missed the net by a hair on his attempt.

Rijeka remain tied with Dinamo on points, but fulfill the second place spot due to goal difference. Lokomotiva remain winless and are in last place, but will play in the Europa League play-off round against Genk on Thursday. 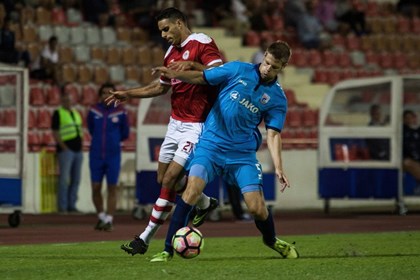 Both RNK Split and HNK Cibalia remain winless, but both sides were going for the win on Friday, although the came away with a 2-2 draw.

Split emerged from the first half up 2-0, thanks to goals from Elis Bakaj in the 31st minute and Josip Jurendić in the 37th. But Cibalia’s Frane Vitaić turned the match upside down in the second half with his 67th minute wonder-goal free kick from 20 yards out.

Vitaić curled the ball up and over the wall and bent it into the upper corner of the goal, leaving the keeper helpless. The goal will is an early-season candidate for goal of the year. Vitaić was credited with the second goal, scored in the 88th minute off a deflection from a Split defender. The match ended 2-2 in Split, and the teams each walked away with one point. 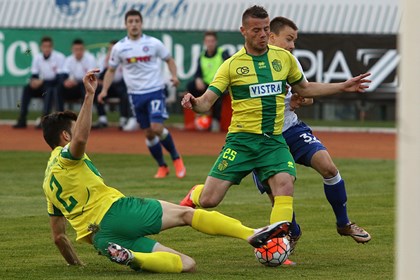 Slaven Belupo and NK Istra 1961 are two more teams that remain without a win after five weeks of play. The two sides played to a 0-0 draw on Saturday in Pula. 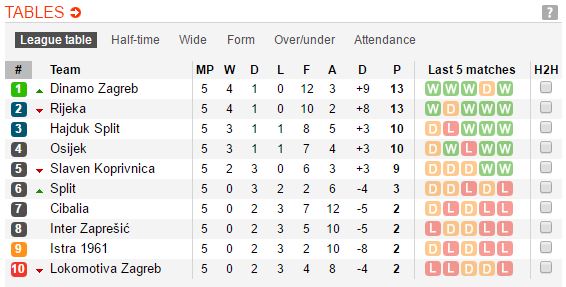