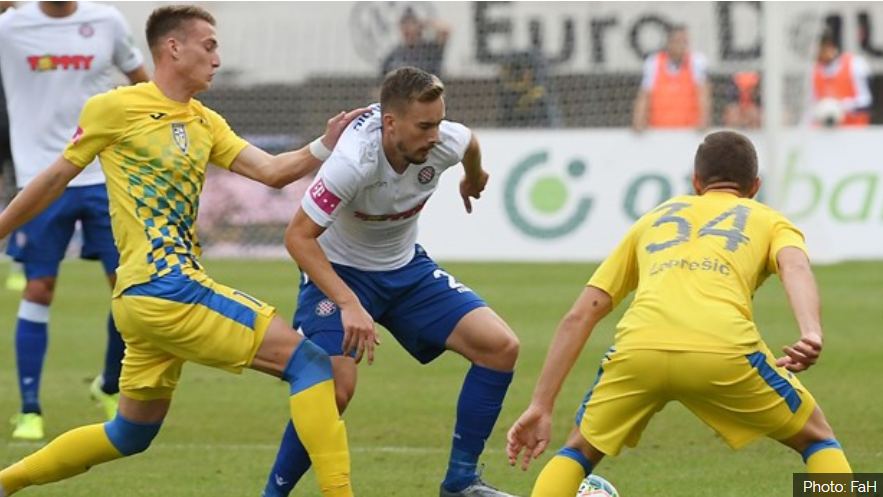 Hajduk Split was able to increase its lead at the top of the table yesterday with a 3-1 win over Inter Zaprešić. The win came on the heels of a Dinamo Zagreb blunder at Varaždin earlier in the weekend.

Split welcomed Inter to Poljud leading the league while Inter was looking for its second win the season.

Zaprešić fought off several scoring attempts by the home side, but succumbed to the pressure late in the first half when Mijo Caktaš slotted in a penalty to tally Hajduk’s first goal.

The second goal came immediately after the start of the second half from Stanko Jurić received an errant pass from the Inter defender right in front of goal and easily finished it to make it 2-0.

Inter brought the match within one three minutes later when Serder Serderov scored his fourth goal of the season but Brazilian Jairo scored the third goal for Hajduk in the 86th minute to seal the win for the Bili.

Dinamo Zagreb is coming off the historic Champions League win of Seri A side, Atalanta, but must have left their motivation and will to win at Maksimir.

Skipper Nenad Bjelica obviously rested many of his key starters, but this match should have been a testament to the depth of his squad.  Instead, they were shut out by Prva Liga newcomers, NK Varaždin, who fought hard for their first victory in the season.

After a scoreless first half, Varaždin found the lead via a goal from 22-year-old Cameroon-native Jessie Guera Djou. The match was his second appearance of the season and first goal of the season.

The Dinamo coach had some strong words for his players after the match. Bjelica expressed that he was disappointing with his players, stating some of them believe they should play in every match, domestic and European. He stated players that were previously happy playing in the league are now not happy to do so. Bjelica also said those players will no longer be in his lineups and playing time will be based on merit.

NK Osijek has also faced their share of struggles. After a disappointing draw at home to Varaždin last week, Osijek coach Dino Skender was put on the hot seat. His attempt at keeping his job was far from satisfactory this week as Osijek dropped all three points to Lokomotiva.

The match ended in a 2-1 loss for Osjiek, which also marked the departure of Skender. No replacement has been announced.

HNK Rijeka took care of business in Pula on Sunday with a 3-0 victory. Goals were scored by Franko Andrijašević, Filip Lončar and Robert Murić. The win propped Rijeka up to third place.