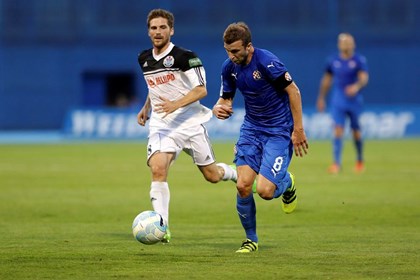 90 minutes of scoreless action ended in a 1-1 draw for Dinamo Zagreb and Slaven Belupo on Friday after each team scored a stoppage-time goal.

The match at Maksimir saw a stale mate perpetuated by Slaven’s tactics of putting 10 men on defense and trying quick counter attacks that proved unsuccessful for the the majority of the match.

Dinamo knocked on the door with chances from Junior Fernandes in the 13th minute as well as from Marko Rog, but Slaven’s goalkeeper, Antun Marković was there both times to make the save.

A 92nd minute goal from a corner kick put Slaven ahead 1-0. Aleksander Jovičić flicked a header on goal out of the reach of Eduardo, who started in goal for the Modri on Friday.

The lead was short lived as Dinamo responded instantly with a goal from Leon Benković. Benković’s laser of a shot left Marković stunned in his goal. The 94th minute goal tied the match 1-1, which it ended only seconds later. The teams split the points, leaving Slaven in second place, two points behind Rijeka. Dinamo has played one fewer matches and sits in fifth place. 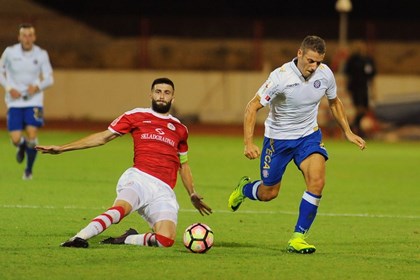 The Splitski derbi ended in a close 1-0 victory for Hajduk on Sunday, thanks to a 91st minute goal by Franck Ohandza.

The match, much like the Dinamo match, was highlighted by a stingy defense by Split and offensive pressure from Hajduk. Several chances were created by Hajduk, but none that were converted to goals.

Hajduk’s injury-time goal came off the head of Ohandza. A desperate cross was sent in from Zvonimir Kozujl towards the Cameroonian who beat two Split defenders in the air to head the ball in the net. Ohandza is only 5”10’, beat defenders Frane Maglica and former Hajduk player Jure Občivać in the air for the ball. Both players are over six feet in height.

Hajduk has played one fewer games than the rest of the league, but remain in third place. RNK Split remain winless and are in lasts place. 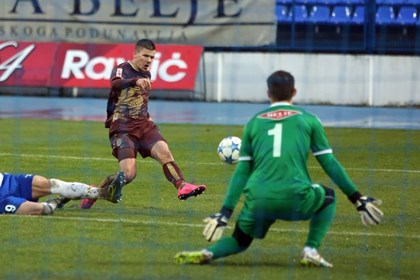 NK Osijek have proven that they are going to be a tough team to face throughout the season and gave Rijeka a run for their money on Sunday, but Rijeka proved to be too much of a team for Osijek to handle.

Josip Mišić scored the only goal in the match in the 41st minute. It’s all Rijeka needed to take the match and remain in first place.

Osijek nearly had an equalizer after Rijeka’s goal, but Antonio Perošević wasted the opportunity with a poor shot that went sailing over the crossbar.

Despite the defeat, Osijek rise to fourth place. 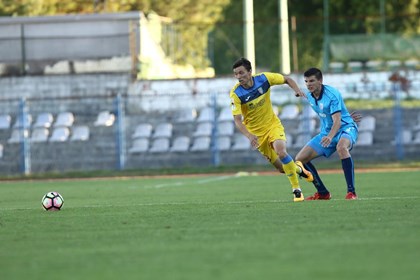 Inter Zaprešić and Cibalia earned their first points of the year in a six-goal draw.

The match stated with an early goal from Inter scored by Jakov Filipović. Filipović scored off a header sent in on a free kick. Cibalia answered quickly with a 13th minute goal by Sandro Ugrina. Cibalia took the lead in the 34th minute with a goal from Edi Baša.

Poor defending by Cibalia let to Inter tying it back up at two goals apiece before the end of the first half. The goal came from another free kick. Cibalia defenders failed to challenge their opponents and left Mario Brlečić an easy opportunity to flick the ball in the goal with his head.

Jakov Puljić regained the lead in the 55th minute with a thunderous volley directly off the cross. Puljić’s goal was hit into the roof of the net, leaving goalkeeper Mladen Matković completely helpless.

Ivan Mikulić nearly gave Inter a two-goal lead, but instead hit his curing shot off the cross bar, keeping the score the same.

Frane Vitaić was the hero for Cibalia hen he tied the match 3-3 in the 85th minute with a stunning free kick from 30 yards out. Vitaić’s kick left Ivan Čović frozen in his net as the ball hit the upper 90 at the near post.

A 91st penalty appeal did not go the way of Inter, as the referee let play continue after Andrea Ottochain was clearly taken down by Ivan Zgrablić in the box.

The teams split the points, each recording their first non-defeat of the season 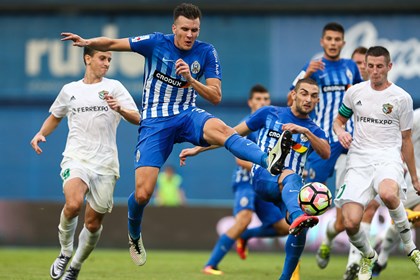 NK Istra remain without a win for nearly a year after playing to a 1-1 draw against NK Lokomotiva in Pula over the weekend.

Istra gained the lead in the 24th minute when Theo Solomon took advantage of a mistake from Lokomotiva goalkeeper Danijel Zagorac. The play was in part thanks to Istra goalkeeper, Vanja Iveša, who punted the ball nearly the length of the field, forcing Zagorac to come out of the box and misplay the ball to Solomon.

Dejan Radonjić scored the game tying goal in the 72nd minute. Istra secured their first point of the season with the draw and Lokomotiva, their second. 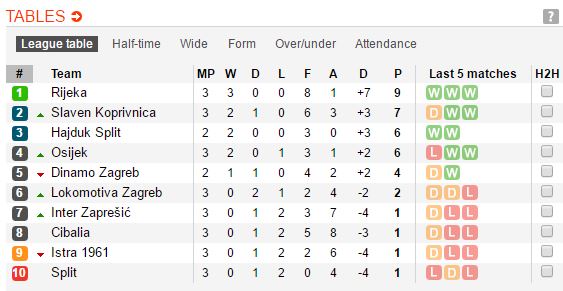