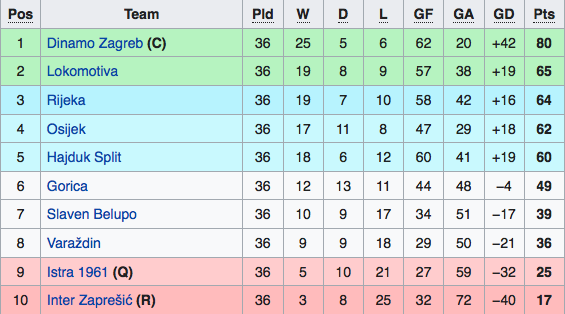 It was a wild finish to the Croatian Prva Liga season as Lokomotiva and Osijek locked horns on the final day to determine who would go to Champions League qualifying. Osijek needed an outright win to finish second but an 88th minute Danijel Lončar own goal would send Lokomotiva (basically Dinamo Zagreb’s 2nd team) to a 2-1 victory. That goal would have put Rijeka through, but instead, will see Rijeka, Osijek, and Hajduk all enter the Europa League qualifying rounds.

Dinamo Zagreb wrapped up yet another Croatian title weeks ago and will enter Europe on August 25th or 26th in a 1-leg 2nd Round qualifying fixture. The pots have yet to be determined for the draw.

More to come from Colin later in the day…