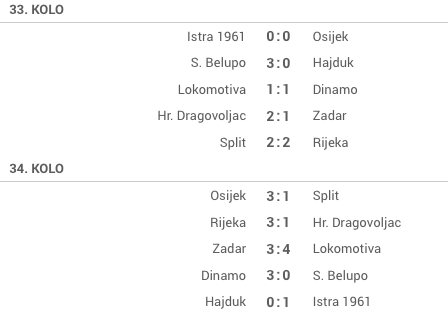 The relegation battle is in full force in the final weeks of the Prva Liga. Dinamo has the title wrapped up, and Rijeka and Hajduk have sealed up the final European competition spots and will be on their way to the Europa League next season, but the remaining action is taking place at the bottom of the table.

Only six points separate the seventh place team from the tenth place, and the teams near last place have been playing some of their best football to date.

Hrvatski Dragovoljac and Slaven Belupo have both won three of their last five games, which doubled the total amounts of wins for both clubs.

Slaven won a huge match against Hajduk Split, winning 3-0 in Koprivnica, but found themselves on the wrong side of a 3-0 score line this past weekend on their visit to Dinamo Zagreb.

Osijek are doing their best trying to climb up from the bottom by winning five of their last seven matches. Osijek sits only three points above the relegation playoff zone, and is tied with Zadar on points.

NK Zadar seemed to be safe from relegation, but lost the past seven straight matches, leaving them near the drop zone.
The Druga Liga is also nearing the end of its season with NK Zagreb resting with a comfortable lead on top of the table. It is safe to say that they will be rejoining the Prva Liga come next season.

NK Cibalia will be making a bid of their own when they face the ninth place team in the Prva Liga for their playoff for possible promotion. 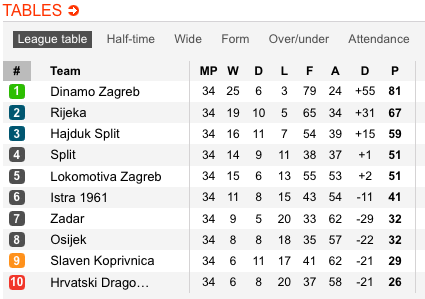