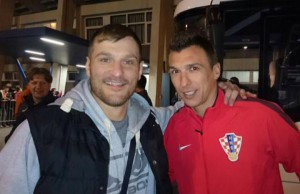 The time has arrived for Stipe Miocic to realize his dream of becoming the undisputed Heavyweight champion of the world. On Saturday night at UFC 198 which takes place in Curitiba, Brazil, Miocic will meet current UFC Heavyweight Champion Fabricio Werdum in the main event. The Cleveland born Croatian is coming off an absolute destruction of former Heavyweight champion Andrei Arlovski in under a minute. He will look to build off that victory and take the fight to the Brazilian Werdum and capture the gold.

Werdum on the other hand is riding a 6 fight win streak. His last win was a submission victory over heavyweight king pin Cain Velazquez who was thought to be unbeatable. Werdum has slick Muay Thai and is a world champion at brazilian jiu jitsu. Fabricio also was Mirko “CroCop” Filipovic’s ground coach back in the Pride Fighting days.

I see this fight being like a game of chess with both fighters looking to use their advantages and game plan to get the upper hand. I think Miocic will use his footwork, wrestling and boxing to pick apart Werdum and take the fight in the third round by TKO, although this is MMA and anything can happen in the Octagon.

Can Miocic bring the title home to Cleveland and give the city a Championship before Lebron James?

How do the readers of Croatian Sports see this fight ending? Let’s hear your predictions?