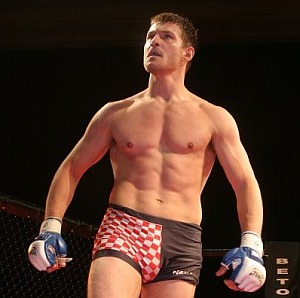 It will be Croatia vs. Brazil a few weeks early for MMA fans as Cleveleand born Croatian heavyweight Stipe Miocic returns to the octagon versus Brazilian Fabio Maldonado. Miocic gave the Crippler a candid phone interview this week, where he discussed his up coming fight, Croatia’s chances in the upcoming World Cup and also gave his take on sex before a fight.

Miocic’s original opponent, Junior Dos Santos, was forced to withdraw from the main event bout with a hand injury he sustained a couple weeks ago, which forced the UFC to find Stipe a new opponent on short notice.

Fabio Maldonado was the only one to rise to the occasion and apparently asked for the bout.  He will also be stepping up a weight class to face the Croat as he is a natural light heavyweight.

“No he was the first one, it’s a good fight he’s a tough guy its going to be a great fight” Miocic

On whether he had to change up his training camp or gameplan since the change of opponents, Stipe said:

“They didn’t have to change to much, just a few tweeks here and there which we will go through again this week. We have a great style that can beat anyone , great coaches and great gameplans.”

Miocic also assured fans  he isn’t looking past Maldonado and is concentrating on May 31st and nothing else right now.  The Croatian heavyweight also seemed ready when asked if he was looking forward to the fight.

“Yah Yah I’m excited and pumped for the fight”

Last but not least the Croatian Sensation advised the Crippler he cuts out any sexual intercourse usually a week and a half to two weeks prior to a fight.

The fight takes place this Saturday May 31st, in Sao Pauolo, Brazil and serves as  the main event of the UFC Ultimate Fighter Brazil Finale.

You can listen to the audio of the full interview below. I apologize as the sound quality of the audio is not the best due to technical difficulties with the program being used.