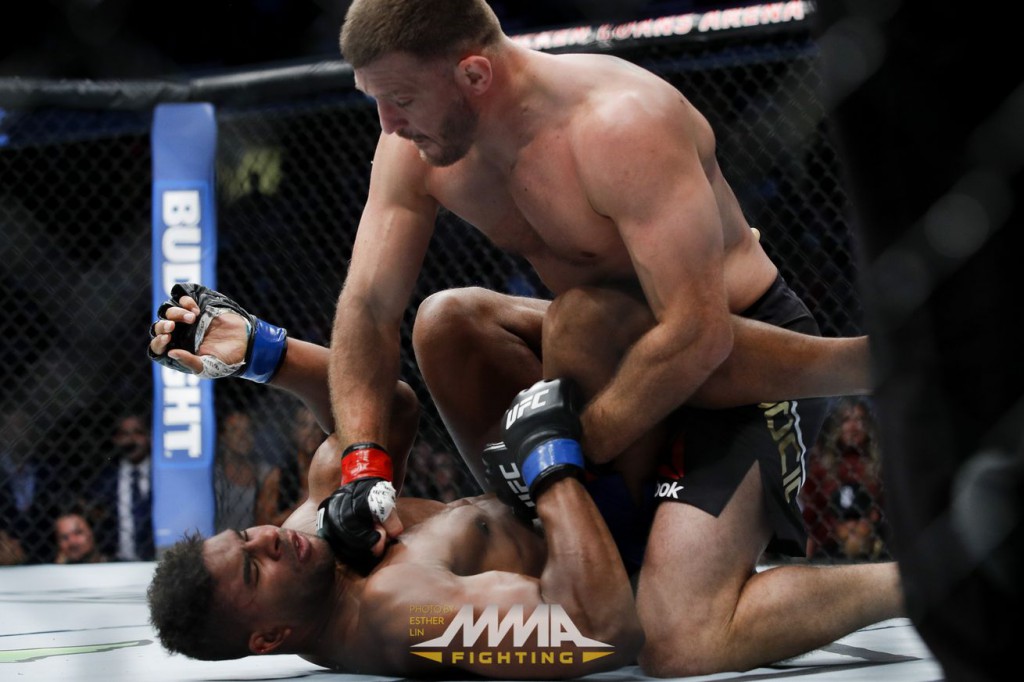 Stipe Miocic has succesfully defended his heavyweight belt with a first round knock out of Alistair Overeem. Miocic used his boxing, wrestling and ground/pound to secure the victory from top control. Overeem did test Miocic’s chin early but was unable to impose his will and the Cleveland born Croatian took over for an overall dominating win. More to follow soon.

The newly crowned UFC Heavyweight Champion Stipe Miocic will defend his title for the first time Saturday night against the dangerous Alistair Overeem at home in Cleveland, Ohio. Miocic won the heavyweight title at UFC 198 with a devastating first round knock out of Brazilian Grappling Ace Fabricio Werdum breaking Cleveland’s 52 year championship drought. Since winning the heavyweight title Miocic has been a busy champion in the months leading up to tomorrow nights bout. The champion has stated several times this past week though that he has trained harder then ever and is ready to defend that title in front of the home town crowd at the sold out Quicken Loans Arena.

Miocic’s opponent Alistair Overeem is coming off of knockout victories over Andrei Arlovski and former champion Junior Dos Santos. The dutch kickboxer is a a former K1 World Champion in kickboxing and held the MMA heavyweight titles in Dream and Strikeforce. He is one of only 2 fighters to hold world titles in kickboxing and MMA and has had over 80 professional bouts between the two sports. Overeem is coming into this fight very confident and thinks Miocic has been enjoying the Championship lifestyle a little to much and not concentrating on his training.

“He’s enjoying the life, and that’s not a bad thing. But know somebody’s coming and somebody’s going to take that belt, and he’s not going to enjoy life.”

The bout will be Miocic’s toughest fight to date for many reasons including the pressure of defending the title for the first time in front of your home town crowd. Overeem presents a very dangerous arsenal of stand up techniques that can end the fight at anytime. The Dutch kickboxer is devastating in the clinch and has a punishing ground and pound game when in top control. The biggest knocks on Overeem over the years has been his heart when the fight gets dirty and his week chin which has been exposed many times in his career. The key to success for Miocic in this fight is to make it a grinding dirty fight while mixing up his wrestling and striking. The Cleveland born Croatian will have to keep the pressure on the Dutchman and not allow him to get comfortable and set up his strikes/distance. If the heavy handed Croatian can touch Overeems chin I think he will defend that title but anything can happen in the heavyweight division as one mistake can be lights out.

Croatiansports.com readers let me know what your prediction is for Saturday Nights Championship Fight