Tuesday night the Croatian Crippler attended a unspecified location in Winnipeg Manitoba to sit in on Stipe Miocic’s training session. The Croatian Heavyweight contender looked to be in good form and ready for the biggest fight of his career on Saturday night. 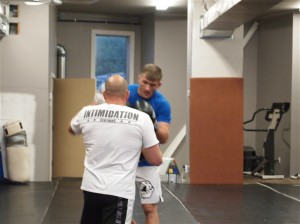 Stipe Miocic did reveal his special technique  that he has been practicing for the past few months. This move will ultimately ensure a victory in his favour.  I would compare this ancient fighting technique to the “Crane” move used in the Karate Kid movies. It is just unstoppable and you are unable to defend against it. The Croatian Heavyweight travelled to China to train with the ancient Monks who showed him this ancient fighting style. Below I have attached the video, but just make sure it does not fall into the wrong hands prior to fight night.