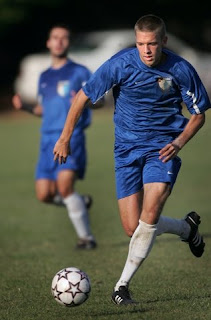 A few months ago, CroatianSoccerReport.com did a story on up-and-coming Croatian-American soccer player, Peter Hazdovac. After attending the Kranjčar Soccer Academy in Zagreb and then training with Prva Liga side, NK Zadar, Hazdovac was loaned out to NK GOŠK Dubrovnik of the Croatian Treća Liga (Third League).

Since then, he’s been absolutely tearing the league apart with almost a goal in every game as well as leading GOŠK to the top of the table. Hazdovac is unsure of what he will do when the winter break hits; as he will come back home to Los Angeles for the holidays. Currently, teammates desperately want Peter to return after the break to finish what they all started.

In his most recent game in Split, Peter scored 2 goals in a 2-0 GOŠK win. He was also tripped up in the first 5 minutes of the game by the opposing keeper, who was given a straight red.

Nick Green, author of 100% Soccer and sports columnist at the 100,000 circulation Daily Breeze newspaper, based out of Torrance, Ca. recently had an interview with Peter which ran on October 20th.

One reader left a comment that I think justifies Peter’s current situation:

“I am fortunate to be currently living in Dubrovnik where I am working as a photographer for the two national newspapers, Jutarnji List and Slobodna Dalmacija and have photographed several of Peter’s games with GOŠK. After seeing him play, I agree that Peter is too good for his entire League. The team he is playing for was a pathetic afterthought in the city. After his arrival, Peter brought a new energy and spirit to his teammates, was responsible for goals in every game he played in and took his team straight to first place in the standings. Peter’s energy transcends just physical talent and this is what the “secret sauce” is to being a pro athlete. I agree that Peter most definitely belongs in the MLS. Your team would be crushed to see you go and would most definitely return to being an afterthought, but the MLS is waiting…”

So now the question is: What is the better position to be in? Dominating a 3rd League in Europe where you are most likely to be promoted or start from scratch in America with a nice resume at the age of 22? If you had a kid that was in Peter’s situation- what would you suggest he do?