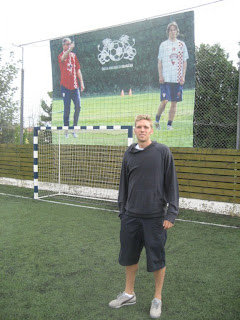 Good friend of mine and fellow soccer colleague, Peter Hazdovac, has traveled across the pond to test his skills against the best Croatia has to offer. While on regular holiday this summer in Dubrovnik, where his family is from, Hazdovac was invited to attend the Kranjčar Soccer Academy in Zagreb.

The 6’4″ 185-pound Hazdovac impressed trainers at the academy with his stubborn defense and aggressive technical play. His natural position at stopper, however, should not be confused with his ability to score with a ferocious strike. With defense mimicking Vedran Čorluka and a shot rivaling Wayne Rooney, any team would benefit from picking up the Southern California native.

As the academy in Zagreb concluded, Hazdovac immediately was invited to join NK Zadar of the Croatian Prva Liga for training. He has been practicing with the club for the past 10 days as he hopes an invitation to join the team as a full member is extended. Zadar can use a little change as they have started the season 0-1-2 through the first 3 games.

Hazdovac started playing college ball immediately after high school for Cal Poly Pomona. His resume includes scoring 10 goals while posting 8 assists in his 4 year college career. He has attended numerous Chivas USA (MLS) combines in Los Angeles where he has performed in the top flight. The move to Croatian soccer has been successful so far, let’s hope it only gets better.