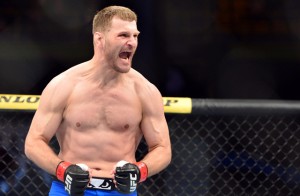 Stipe Miocic has the biggest fight of his career coming up on December 13th versus Junior Dos Santos in Phoenix,Arizona. This week though Miocic finally launched his new website WWW.Stipe-Miocic.com. It also seems he now has a new nickname “The FireFighter” for his next bout. The new website feautures everything from candid photos to merchandise and even a few interviews with the Croatian Crippler to give it some instant credibility (joke).

Fans now have a chance to preorder a variety of Miocic support gear to show the UFC Heavyweight their support. I have also been told that other merchandise will become available soon. If you have a few minutes while on the computer head over to the site and check it out. Also keep on checking in at CroatianSports.com leading up to the fight for analysis and interviews with Stipe Miocic prior to the Dos Santos match up.