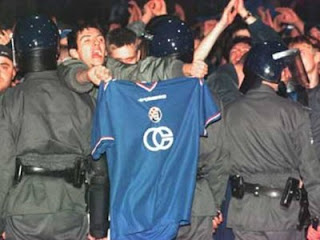 February 14, 2011 marks the 11th anniversary of the day that the Bad Blue Boys brought back the holy name Dinamo to the city of Zagreb over a turbulent nine year battle with the club’s (then) executive board, mainly Zlatko Canjuga, and the top political party, HDZ, with former Croatian president, Franjo Tuđman, at the helm.

After openly supporting Tuđman and his HDZ party during the late eighties and early nineties, the Bad Blue Boys were “thanked” by having the club’s name they supported–a club synonymous with the Croatian struggle in the former Yugoslavia and dubbed the Croatian team–ripped from them. Like a dictatorship, with no explanation or cause, the club’s name was changed to HAŠK-Građanski in 1991 against the discretion of the Bad Blue Boys and other Dinamo supporters. HAŠK and Građanski were two separate rival clubs, along with Concordia, that dominated the Zagreb soccer scene pre-World War II. All three clubs were eradicated in 1945 after being deemed “ustaške” by the communists for cooperation with the Pavelić government during NDH. In their place, Dinamo was formed by the communist regime, though many Dinamo supporters today see Građanski as the club’s predecessor since the supporters, players, coaches, team colors, stadium and nickname were the same.

The mere name change in 1991 from Dinamo to HAŠK-Građanski could be compared to the delusional and ridiculous coupling of teams such as Real Madrid-Barcelona, Celtic-Rangers, and Liverpool-Manchester United to name a few.

In 1993, it only got worse. The announcement was made that there would yet again be another name change from HAŠK-Građanski to NK Croatia Zagreb–a move distinctly made by Tuđman. Tuđman vehemently opposed Dinamo and ordered the police to confiscate any items that had the name Dinamo or small ‘d’ on it during games. He often publicly spoke against Dinamo because he felt the name was “too communist.” Ironic, considering he himself used to be one of Tito’s generals and the former president of Partizan Belgrade, a Dinamo foe from the old Yugoslavian league that was considered the army’s team.

A classic case of the pot calling the kettle black.

Since that point, the Bad Blue Boys vowed to fight back and bring back their holy name of Dinamo. Throughout the years, the Bad Blue Boys would go to games with their Dinamo flags, banners, scarves; even if they were met by the receiving end of a police baton and a cold jail cell. The famous Croatian rock group, Pips, Chips and Videoclips, recorded ‘Dinamo Ja Volim’ (Dinamo I Love) which even today serves as an anthem to all Dinamo supporters. Plays and a book were even written during their struggle.

The culmination of their battle occurred in front of the west side of Maksimir stadium on February 14, 2000. About 3,000 Bad Blue Boys made their presence known outside of the club’s administrative offices, clashing with police officers, singing songs, waving flags, banners and dawning their beloved ‘d’. Inside the club, after hours of long deliberation, one of Dinamo’s legends who was involved in the meetings, Velimir Zajec, declared:

In 2011, the Bad Blue Boys have a new fight on their hands against Zdravko Mamić. Dinamo has kept its name but now they want their club back and they will be heard. They stood up in defiance against Yugoslavia in the eighties, defeated Franjo Tuđman and his HDZ cronies in the nineties, and now they proudly stand up against Zdravko Mamić. If the adage of history repeating itself is accurate, the Bad Blue Boys will once again come out victorious.

Today we remember their battle from ten years ago and Croatian Soccer Report stands behind them in their present cause today. 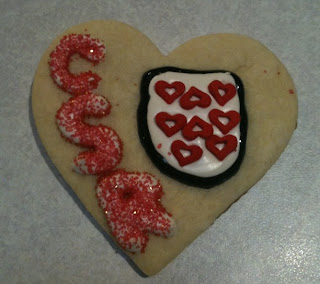