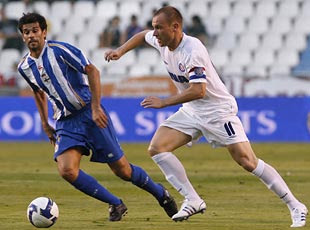 Slaven Belupo managed a respectable loss in Greece to Aris Thessaloniki today. With no score at halftime, Aris finally pulled away in the 55th minute with a goal by Spaniard, Sergio Koke. Slaven is going to have to score some goals in the return match if they want to extend their UEFA Cup run.

On the other side of Europe, Hajduk grinded out a 0-0 draw in Spain to Deportivo. I couldn’t find any information online regarding these 2 games (so anything from the readers would be helpful) but it appears Hajduk is taking their UEFA Cup campaign very seriously. They lost to NK Zagreb earlier in the week 3-0, which is a rare result for Hajduk, and the only thing I can come up with is that they were already looking down the road to the tie with Deportivo.

Although both Croatian sides control their own destiny, Hajduk will need less help. A goal and some solid defense could see the ‘Bili’ move on; and we all know that Torcida will be rockin’ the Poljud when the second leg comes to Split on August 24th.