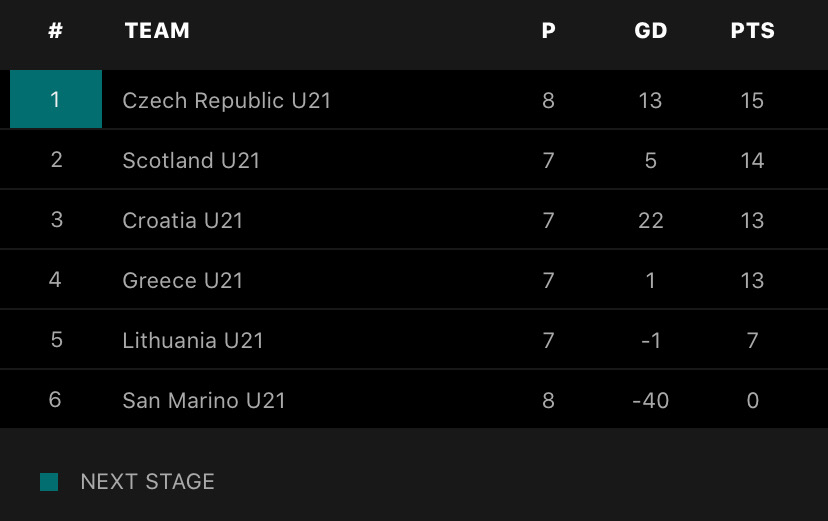 One of the most commonly asked questions among Croatian football fans is, “Are we going to have to wait another 20 years before another successful cup run?”The answer is almost certainly, no.

Not only is Croatia’s youth more talented than ever, but HNL clubs, especially Dinamo and Lokomotiva Zagreb, have been incredibly consistent in forming their teams around these future stars. The youth of the Prva Liga forms most of the current Croatia U-21 squad, that currently holds the third-place position in their U-21 Euro qualification group. Only two points behind the group’s first-placed Czech Republic side, Croatia are fighting for qualification with a magnificent goal differential of +22. The Czech have one game in hand on the young Croatian side, meaning a win can put the Mladi Vatreni in first place if Scotland, in second-place, draw or lose their next match. After a 10-0 victory over San Marino last week, the boys will be brimming with confidence entering their next match against fourth-placed Greece.

Along with the magnificent chemistry that this squad has to offer, Croatia is producing more individual talent than ever. Some notable players on the team include Joško Gvardiol, Luka Ivanušec, Sandro Kulenović, and Petar Musa. Their current back line, Marin Sverko, Martin Erlić, Joško Gvaridol and David Čolina, all have the potential to be rotational defenders for the senior side in the future. For the first time in awhile, the Mladi Vatreni are offering the senior side center backs with pace, something that has been lacking in Croatian football for a long time. Boško Šutalo and Mario Vusković, playing for Atalanta and Hajduk Split, are two additional young central defenders to keep on our radar as well. As strong as the defense is for this squad, the midfield and attack is arguably the best the Mladi Vatreni have ever seen.

The squad’s midfield consists of Luka Ivanušec, Lovro Majer, and Nikola Moro, filling the shoes of Nikola Vlašić, and will soon be followed by Luka Sučić, one of the best U-18 midfielders in the world. Although he is not on the current squad, the 18 year-old Luka Sučić has already made his senior debut for Red Bull Salzburg in Austria, and has been named “The Next Toni Kroos” by scouts around Europe. After an outstanding UEFA Youth Champions League showing from the 6’1 attacking midfielder, Sučić has shown the potential to be Croatia’s next Balon d’Or winner. Ivanušec, coming off a hat-trick in the squad’s 10-0 victory over San Marino, will most likely be called up by the senior side soon, leading to the call up of Sučić.

Sandro Kulenović and Petar Musa lead the U-21 side’s attack, alongside the likes of Antonio Marin, who recently moved to Serie B side Monza, after being scouted by AC Milan, Manchester City, and PSG. Dario Vizinger, who has impressed in the Austria’s top league, also plays a large part in the Mladi Vatreni attack. Again, Players such as 17 year-old Igor Matanović and 16 year-old Vito Matijević are expected to fill the shoes of these experienced youngsters.

We have a lot to look forward to, in terms of pace, skill, and positive attitude coming from these future stars. As we like to say here often at CroatianSports, the future is bright. Croatia still creates smart and passionate footballers, and there is no doubt that another strong cup run is coming soon.

Sure, there have been flops such as Alen Halilović. But this stop of Croatian wunderkind is deeper than Croatia has ever had in its football history. If you already don’t know the names on the list above, it’s time to learn them.

The Croatia U-21 side face Greece Tuesday at 10AM this (ET).