Luka Modrić underwent successful knee surgery on Sunday which will see the Real Madrid star sidelined for a minimum of one month. And Los Blancos are already feeling the void of Modrić’s absence. On Sunday, Real Madrid drew their third straight La Liga match, this time 1-1 with Eibar. The droppage of points pulls Real Madrid level on points with rivals Atletico. Mateo Kovačić got the start in place of Modrić and played the full 90 minutes but was unable to get on the scoresheet. Kovačić will likely replace Modrić for Croatia during the upcoming World Cup qualifiers against Finland and Kosovo next weekend.

It was an all around dull week for Croatians in Spain. Šime Vrsaljko remained on the bench as an unused sub in Atletico’s 2-0 win over Valencia. Duje Čop played the gull 90 minutes in Sporting Gijon’s 2-1 loss to Deportivo and Ivan Rakitić was not used in Barcelona’s shock 4-3 loss to Celta Vigo on Sunday. With the loss, Barcelona sit two points behind both Madrid clubs.

Liverpool are on a roll. The Merseyside club have won four straight matches and now sit only two points behind leaders Manchester City with their 2-1 victory over Swansea City on Saturday. Dejan Lovren played the full 90 minutes but did not cover well following a corner, which led to Swansea’s opening goal. Lovren had a poor rating in this match as he left holes all over the pitch. It was reported after the game that Lovren suffered a groin injury but should be available for Croatia during the upcoming international break.

Inter lost 2-1 at Roma on Sunday night after an entertaining match as defending was optional. Ivan Perišić started on the left to show his top form as he started crossing from the beginning and kept going until the final whistle. The Croatian international assisted Candreva in the first half, but the former Lazio player’s conclusion ended wide. He then tried to score in the second half. In the 8th minute following a counter attack he targeted the far post but Szczesny denied. During injury time he almost surprised the polish goalie with a cross. The former Wolfsburg star came out as the most solid forward for Inter of the night as he collected 9 crosses and 4 shots.

Marcelo Brozović was not listed in the squad. Problems sounded to be solved after the former Dinamo star had a chat with the manager during the week and his re-installment was on the horizon. However, while Inter were succumbing in Prague during the Europa league second round tie Brozović posted a picture with his girlfiend on Instagram which De Boer did not like at all and subsequently chose to keep him out. “All of my players must realize that social networks might be important but they can be as much dangerous.” The former Ajax manager said. “They must understand when to use them and this is not the right moment. There are certain things that relate to the club. For instance I saw that some Ajax goalkeeper did snapchat during halftime, which for me is not right.” He continued, ” If one of my players had done so? A player ought to be concentrated on the game. Matches do not start with the whistle but the day before. From a professional point of view these behaviours are unacceptable.” Two public reprimands in two weeks need quite a lot of work to recover from. Time will tell whether Brozović will be able to turn things around, but as the mountain gets bigger shrewd people might want to check whether the odds for a move to Uk are shortening. Just in case.

La Gazzetta dello Sport rating: Ivan Perišić 6,5 “The best for inter in the difficult first half. A lot of crosses, one of which finds Candreva in front of the goal. Tries also on his own but finds a reactive Szczesny.”

Juventus beat Empoli 3-0 on Sunday in the day game. The bianconeri controlled the whole match but only went ahead in the second half with Dybala. In the following 5 minutes Higuain closed the match with a brace. Mario Mandžukić looked on from the bench. Marko Pjaca made good company to his international team mate until the 28th minute of the second half when he came on for Dybala. One minute later the former Dinamo star could have scored the 4-0 and his first in serie A when he was ready to tap it in following a counter attack but Lemina selfishly decided to hit the goalkeeper with a shot. Six minutes later the Croatian international won a loose ball and after a good run served Higuain who was anticipated. Lastly he made another run on the left, dribbled an opponent and went on to shoot but Skorupski was ready to deflect it over the top bar. A good performance for Pjaca who has always done his part when called in and always looks capable to create something when served.

La Gazzetta dello Sport rating: Marko Pjaca 6,5 “The ‘non substitute’. Comes in and builds chances. A bit solo artist though explosive. Allegri must find some space for him.”

Fiorentina came back from Torino with no points following a 2-1 defeat. Hrvoje Milić , Milan Badelj and Nikola Kalinić all featured in the starting eleven. Hrvoje did not get off to a good start but improved as time went on. The former Hajduk star ran back and forth and crossed in with good precision most of the time. One of his crosses landed on Babacar’s head and was worth the final 2-1 in the 84th minute.

Milan Badelj failed to give give substance and balance to the team. The former Dinamo midfielder made a lot of wrong passes in both halves and was eventually subbed off in the 68th minute. Nikola Kalinić was used as a lone striker until Babacar came on in the middle of the second half. The former Dnipro star squandered 3 potential good opportunities as he did find it difficult to escape the offside trap in the first 30 minutes. Kalinić then had the biggest chance of the first half but his header was too weak and easily saved from Joe Hart. He also tried a bicycle kick with no luck and had another chance in the second half but lacked confidence to bang it in. All in all the international striker looked lively the whole match which represents a small step forward though his goal tally is still largely insufficient.

La Gazzetta dello Sport rating: Hrvoje Milić 6 “Half guilty on the play that frees Iago Falque for the first goal. He’s better when going forward than when he plays as a fourth defender. Makes an assist.” Milan Badelj 5 “The weak spot: under rhythm, makes too many mistakes and forces his teammate Sanchez to run twice as needed.” Nikola Kalinić 5 “Never manages to score: see the header that hits Hart.”

Palermo surprisingly came out of Genoa with a point following to a 1-1 against Sampdoria. Josip Posavec looked concentrated and in good shape. The former Inter goalkeeper stopped Barreto and Muriel many times. His saves were almost worth 3 points but he had to eventually surrender to B. Fernandes and give away a deserved clean sheet.

La Gazzetta dello Sport rating Josip Posavec 6,5 “(MOTM)Can’t see the ball on the goal but he clearly sees shots coming from Muriel, Barreto and Skriniar which stops with important saves.”

Udinese lost 3-0 at home to Lazio. Stipe Perica was a starter and went the distance for the friuliani. The former Zadar star was paired up front with Zapata to form a powerful duo, the psychical presence of which would cause problems to Lazio according to Iachini. The U21 international started from the left to support Zapata and to put pressure on Patric and managed to attack the box without being marked by De Vrij and Hoedt. The former Chelsea striker eventually resulted the most dangerous player. Unluckily, both his headers were miraculously stopped by Strakosha. A lot of fighting in the middle and a dubious uncalled penalty that he might deserved completed another positive performance.

Andrija Balić received another free ticket to comfortably watch the match from the bench.

La Gazzetta dello Sport rating Stipe Perica 6 “Manages to conclude 3 times, which is not bad. Could have scored with a header in the beginning of the second half but Strakosha was better than him.”

Andrej Kramaric picked up another assist for Hoffenheim as they earned a 2-1 away win at Ingolstadt on Saturday. Kramaric assisted on the match’s first goal, as he put in a perfect cross, right between the keeper and the last defender in the 12th minute. Kramaric now has 4 assists this campaign, behind only Franck Ribery in the Bundesliga. He was all over for Hoffenheim in the match, with 7 shots, one of which came off the post, and two chances created. Hoffenheim are tied for 6th in the Bundesliga after 10 matches.

Alen Halilovic played the final 30 minutes for Hamburg as they fell 2-0 to Hertha Berlin on Sunday. He had one successful dribble and completed 23 passes but failed to generate any chances for himself or his teammates. Halilovic has struggled to make much of an impact off the bench thus far for Hamburg, though the team has been poor as a whole. After six matches they have just one point and sit on the bottom of the Bundesliga. 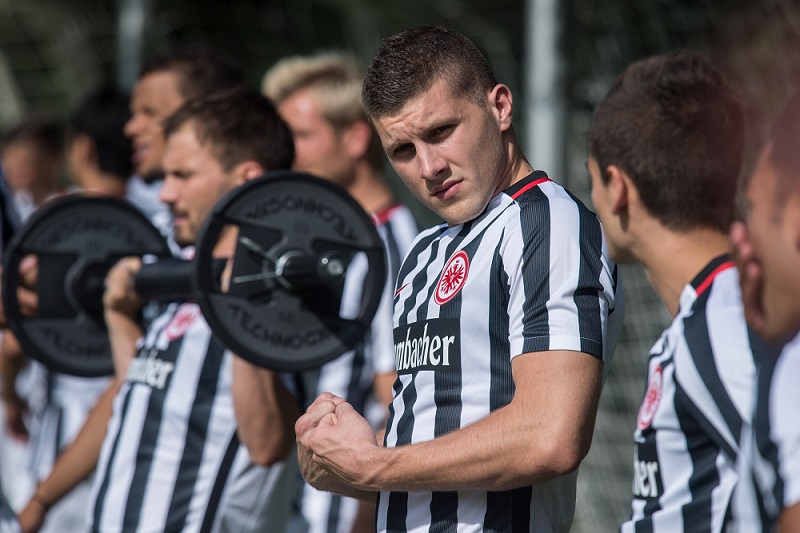 Ante Rebic was left out of Eintracht Frankfurt’s squad on Saturday as he continues to rehab a foot injury. Frankfurt fell 1-0 at Freiburg and are 8th in the Bundesliga after 6 matches.

Tin Jedvaj was not on the roster as Bayer Leverkeusen earned an impressive 2-0 victory over Borussia Dortmund on Saturday. Leverkeusen are 6th in the Bundesliga with 10 points in six matches.

Danijel Subasic was in net for Monaco Saturday as they went on the road and demolished Metz 7-0. Subasic made three easy saves in the match as he was largely a passenger. Monaco remain one point off the top of Ligue 1, with 19 points in eight matches.

Domagoj Vida played the full match at the back for Dynamo Kyiv as they won 2-0 at home against Zirka on Sunday. Kyiv sit six points behind Shakhtar, second in the Ukrainian Premier League, with 22 points through 10 matches. 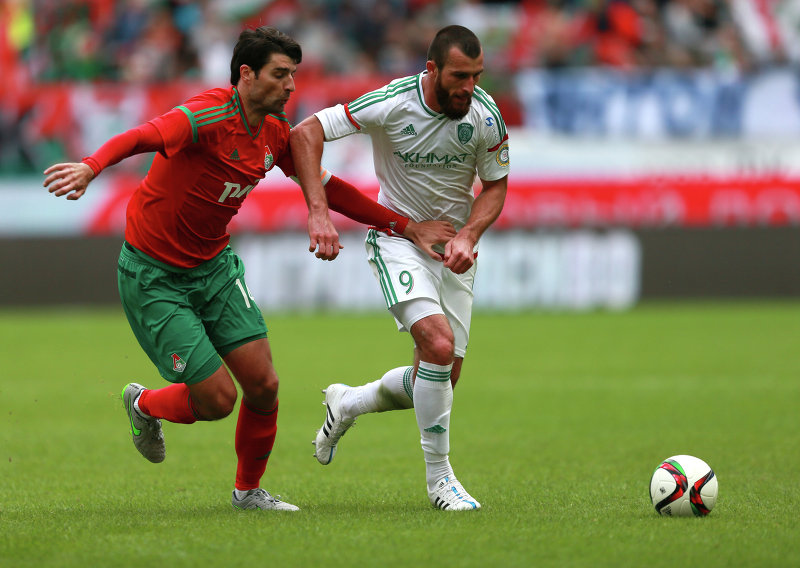 Vedran Corluka played the full 90 minutes for Lokomotiv Moscow as they drew once again on Saturday, in a 1-1 contest against Arsenal Tula. Corluka was not at fault for the goal, as Loko’s keeper was caught in no man’s land on a corner. Lokomotiv have only won one of their first nine games, and are 13th in the Russian Premier League.