In an early season matchup for Champions League position, Nikica Jelavić and Everton left it late to stun Tottenham at Goodison Park, scoring not one, but two injury time goals in a 2-1 victory. After going down in the 76th minute to a Clint Dempsey deflected strike, Everton plugged away and got the equalizer through a 90th minute  Steven Pienaar header to make the game 1-1. Two minutes later, Everton’s Apostolos Vellios whipped in a cross from the right side to the center of the box, where Jelavić found the pacing ball to one-time it into the back of the net for his only shot on goal.

Jelavić ran over to Everton fans, went crazy with them, was yellow carded for the celebration and was subbed off one minute later. With the win, Everton now climb to fourth position in England, tied with Tottenham and West Brom on points, having the better goal differential. The season is nearly half complete. Can we start talking about Everton making a push for the Champions League next season?

Mladen Petrić and Fulham face Newcastle United on Monday Night Football in England from Craven Cottage (3PM ET.) Can Fulham start pulling themselves out from the bottom half of the table?

Ante Vukušić is on the board in Italy! The 21 year-old former Hajduk Split star scored his first goal in Serie A for Pescara in a 2-0 win over Genoa on Sunday. Vukušić received a pass from Vladimir Weiss in the middle of the box and the Croatian left-footed past Genoa keeper Sebastien Frey to make it 2-0 in the 73rd minute. Frey got a hand on it but appeared to see the ball late. Vukušić ripped off his shirt and celebrated with his bench, earning a yellow card in the process. It was only Pescara’s fourth win of the season, bringing them to the brink of safety in Serie A.

Marko Livaja remained on the bench in Inter Milan’s 2-1 Serie A win over Napoli on Sunday, bringing the Nerazzurri only four points behind leaders Juventus. However, the 19 year-old Croatian striker received the start on Thursday in Europa League vs. Nefchi Baku, scoring twice in a 2-2 draw. The kid is capitalizing on his few chances in Milan as Inter chase the Scudetto. Although he won’t see much playing time in league play, Livaja has shown his worth in Europa League. Inter Milan finished the group second and will be unseeded for the December 20th knockout round draw.

Ivan Rakitić scored his fourth goal of the season for Sevilla in their 2-2 draw to Espanyol. After Baba Diawara was brought down in the area, the ref pointed to the spot and Ivan stepped up and placed it into the bottom-right corner. Sevilla went down to ten men 15 minutes later and were on the back foot for the rest of the game, limiting Ivan’s influence, but he was able to force a tough save from Cristian Alvarez late in the game. Sevilla are 11th through 15 games and five points out of the final Europa League spot.

Luka Modrić was used as a sub Saturday in the 62nd minute with Real Madrid trailing Real Valladolid and he helped Los Galacticos overturn the deficit and secure all three points in a 3-2 victory. Luka made a few good runs and his ball to Benzema lead to the free kick from which Real took the lead. Real remain in 3rd as both Barcelona and Atletico Madrid picked up wins over the weekend. They play a Copa Del Rey (round of 16) match against Celta Vigo on Wednesday.

Bayern München have one hand on the Bundesliga trophy after defeating Augsburg 2-0 on Saturday and holding an 11-point lead over second place Bayer Leverkusen. Former Dinamo Zagreb striker, Mario Mandžukić, started and played 60 minutes in the win but failed to score his tenth Bundesliga goal. Mario now drops to fourth on the Bundesliga scoring leaders list. The 26-year-old, Croatian international has been on a four game goal drought and has Mario Gomez breathing on his neck for a chance to replace him in the starting lineup.

Well it looks like Borussia Dortmund will not be repeating as Bundesliga champs this year after suffering a shock 3-2 home defeat to Wolfsburg on Saturday. Dortmund were reduced to 10 players after Marcel Schmelzer picked up a straight red card in the 35th minute and giving up a what was then a game tying penalty kick to Diego. Ivan Perišić checked in at halftime to give Dormund some fresh legs and they did manage to equalize in the 61st minute of play from the spot. However, Dost would score the game winner for Wolfsburg ten minutes later. Ivan did what he could playing with a man down and finished the match with one shot on goal. Dortmund are 14 points back of Bayern for the Bundesliga crown.

Ivica Olić was left off the squad by Wolfsburg. No word on why Ivica didn’t travel to Dortmund. Srdjan Lakić failed to come off the bench for Wolfsburg in the win.

Hamburger SV continue to move up the Bundesliga ladder and are now only three points behind Frankfurt for the final Champions League spot after an impressive 2-0 win over Hoffenheim on Friday. Former Dinamo Zagreb defensive midfielder, Milan Badelj, started and played the full 90 minutes in the win. Milan helped HSV register their sixth shutout of the season but left the pitch limping after injuring himself just minutes before the final whistle. Reports out of Hamburg suggest that Badelj pulled a thigh muscle and is listed as questionable against Bayer Leverkusen on Saturday. Ivo Iličević failed to come off the bench for Hamburg.

Ivan Klasnić was left on the bench for Mainz in a 2-0 loss to Borussia Mönchengladbach on Sunday.

Stipe Pletikosa was in net for FC Rostov as they lost a tough one to Krasnodar 2-3. Rostov will feel hard done to have conceded three and Pleti should have done better on the second but he did make a few key saves in the second half. Rostov head into winter break in 11th place.

Vedran Ćorluka went the distance and picked up a yellow card as Slaven Bilić’s Lokomotiv lost 1-0 to Volga Nizhny in their final match before the winter break. Vedran was not at fault for the goal as Lokomotiv head into the break in 6th, right in the thick of the competition for Europa League spots. 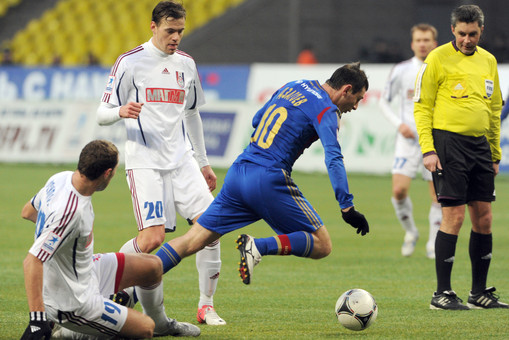 Tomislav Dujmović started and played 52 minutes in Mordovia’s 2-1 away loss to CSKA Moscow. He was subbed off in an attacking move for Ruslan Mukhametshin, a striker. It was Mordovia’s eighth consectutive loss as they head into winter break with lots of work to do. They have taken only 9 points from 19 matches and face 2 of the top three teams right off the bat when the league returns in March. 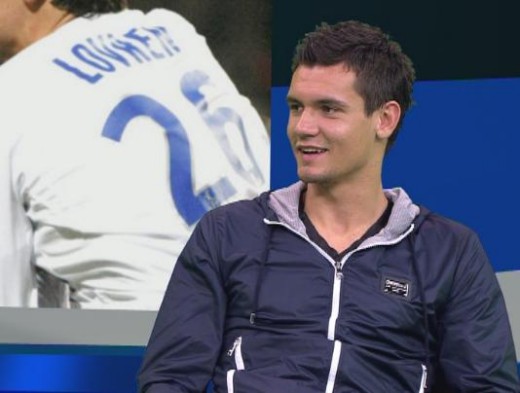 Lyon keep on rolling in France while defender Dejan Lovren (above) heals a hip/thigh injury he picked up on November 16th. He is expected back on January 4th. In his absence this week, Lyon defeated Israeli club Ironi Kiryat Shmona 2-0 on Thursday in Europa League; good enough to top the group. On Sunday, Lyon survived an early 2nd half red card to defeat Saint-Etienne 1-0 to move them five points clear of PSG atop the Ligue 1 table.