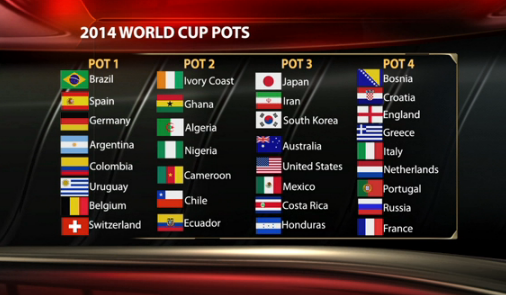 FIFA made an extreme move on Tuesday regarding this Friday’s World Cup draw which will take place at Noon (ET). Originally, the lowest ranked European team, France, was scheduled to join African and South American teams in Pot B to to help continental balance for the group stage draw of the World Cup. Since nine unseeded European teams qualified for the World Cup, although there are only eights countries in each pot for the the draw, one team needed to be moved into pot B; and it was thought to be the French.

However, FIFA said Tuesday that they will do a pre-draw from Pot 4 with a random European side being placed into Pot 2 before the draw begins. Although no more than two European teams can be drawn together for the World Cup group stage, this opens up a can of worms for possible ‘groups of death.’

It is a 1-in-9 chance (11.11%) that Croatia gets thrown into Pot 2 at the beginning of the draw which means possible groupings with Brazil, Argentina and Columbia from South America can join the perfect storm of the Netherlands, England, Portugal or France all in one group. Although Croatia plays their best football against the world’s best, it would be an uphill climb at next year’s World Cup in Brazil should this happen.

The same scenario also applies if Croatia get paired with the European whipping boy later in the draw. Anything can happen but Croatian fans around the world should be happy with the Vatreni just qualifying for the World Cup after the past few months of staggering results.

The draw procedure will be as follows:

1. One European team will first be randomly drawn from Pot 4 and placed into Pot 2, in order to create four even pots of eight teams.

2. The draw will then proceed with the drawing of the other seven seeded teams from Pot 1 into Groups B–H, with Brazil having been predetermined to be in Group A.

3. To maximize geographic separation, an ancillary pot (“Pot X”) will be created during the draw procedure into which the four seeded South American teams (from Pot 1) will be placed. One of these four teams will be drawn out.

4. The sole European team from Pot 2 will then be automatically placed into the group of the South American team that was drawn from “Pot X”. This will prevent three European teams being grouped together.

5. All remaining teams will then be drawn sequentially from the pots (i.e. Pots 2, 3, then 4) into the groups in alphabetical order (i.e. Group A, then Group B etc). During the drawing of Pot 2, groups may be skipped over as the two South American teams in Pot 2 may not be drawn into the (remaining three) groups headed by South American seeds.

6. The positions within the eight groups will then be drawn for the non-seeded teams, in order to determine the order of the fixtures within each group. The eight seeded teams are automatically designated the position of Team 1 within their group (i.e. Brazil will be A1).