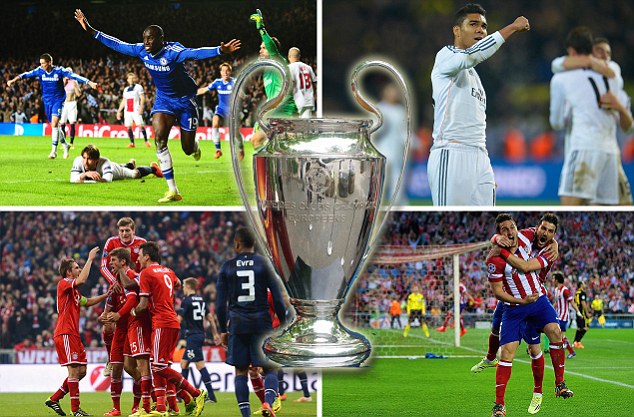 The cream has risen to the top. And only four clubs remain in battle for Europe’s Holy Grail.

Tuesday marks the beginning of the Champions League semifinals where Atletico Madrid take on Chelsea in the Spanish capital. Chelsea, who currently sit in second place in the English Premiership behind Liverpool, will have their hands full with a revamped Atletico side led by Diego Costa and David Villa. Atletico, who are on course to win the La Liga crown this season, shocked Barcelona in the quarterfinals and have the chance to do it again versus a Jose Mourinho led Chelsea side.  Don’t sleep on the Spaniards as they have played lights out this campaign with some electric, fast-paced football. Expect them to play in the Final.

On the other side of the draw, Mario Mandžukić and Luka Modrić will face off against each other in the all-Croatia semifinal. Reigning champions Bayern Munich open up their two-leg tie against Real Madrid at the Bernabeu where arguably two of the best teams in the world will meet. It should be an absolute treat for all fans alike with these two powerhouses playing for a shot at the final. It will be a toss up who progresses, but Bayern need at least two away goals to have the edge as I predict a 1-1 draw Wednesday night. Gareth Bale has played phenomenal football lately and Ronaldo has been rested as he returns from a minor knock.

Prediction: All-Madrid Final on May 24th in Lisbon. Modrić lifts the Cup!