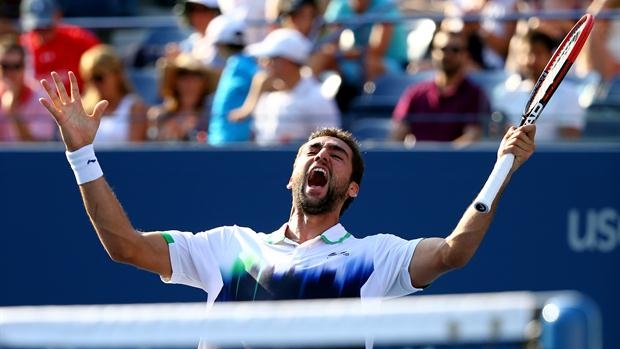 Marin Čilić defeated world #2 and 17-time Grand Slam champion Roger Federer in straight sets Saturday 6-3, 6-4, 6-4 evening to lay in his very first Grand Slam final. With an extremely pro-Federer crowd in New York City, Čilić kept his cool and played his game. On Monday, he will face Kei Nishikori, who stunned Novak Djoković in the other semifinal.

Marin Čilić takes on world #2 Roger Federer Saturday afternoon in the biggest match of his career as the two meet in the U.S. Open semifinals. This will mark the farthest Čilić has ever been in a major event, matching his semifinal Aussie Open run in 2010.

If the Croatian #1 is ever to win a Grand Slam event, this will be his best chance. Čilić disposed of Tomas Berdych in straight sets during his quarterfinal match while Federer had to come back from the dead, taking all three final sets against Gael Monfils to set up his semifinal date. Čilić is aiming for his first Grand Slam silverware while Federer is looking to grab his 18th major trophy.