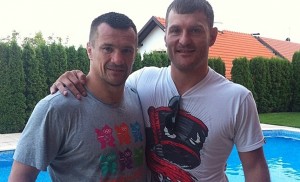 The resurgence of CroCop in the UFC is in full flight after his nasty elbows took the life out of Gabriel Gonzaga in their rematch. Mirko has stated in numerous interviews that he only wanted to avenge his losses from his first stint in the UFC, that is why his next opponent doesn’t make much sense for him. The Croatian legend has been paired up with American slugger Anthony “Freight Train” Hamilton (14-4 record) at UFC Fight Night 79 in Seoul, South Korea. Hamilton will look to make it two in a row after taking out Daniel Omielanczuk via a unanimous decision victory at UFC Fight Night 64. If Filipovic can use his experience and advanced striking repertoire this should be a somewhat easy victory for him.

If Dana White was a man of his word we would of been anticipating a Miocic title shot this year but that is not the case. Instead The Cleveland Croatian product will face Big Ben Rothwell in what appears to be a title eliminator match up. The fight will take place at UFC Fight Night in Dublin on October 24th, 2105. Rothwell is making a strong case for himself as he has been victorious in his past three fights over Matt Mitrione, Alistair Overeem and Brandon Vera and is ranked #8 in the recent rankings. Miocic on the otherhand is currently ranked #3 after his destruction of the Samoan Mark Hunt. Miocic will have to use his superior boxing and pace to take out Big Ben in this one. Rothwell is no easy task for anyone in the division so look for Stipe to stamp his ticket to the title with a victory in Dublin.

The duke has went 2-0 with two first round finishes by strikes since being released by the UFC. If Pokrajac wants to make it back to the UFC he will have to fight much tougher competion then his last two opponents. If Igor can tighten up the holes in his game which were quite evident in his last few UFC fights he may be able to return to the big stage.

Luka Jelcic (6-2) will be competing at the up coming BAMMA 22 event in Ireland on September 19th, 2015 against Tim Wilde (6-1).  Jelcic along with Francisco “Croata” Barrio (5-1) have been in Ireland training at the same gym as The Notorious Conor Mcgregor. Barrio and Jelcic are both Goran Babic products and are looking to make a big splash in the MMA world. I know both guys personally and they have already taken a big step forward by taking their training to SBG Ireland where the abundance of skilled fighters will tighten up their game.

Ante Delija (14-2) will look to capture the M-1 heavyweight title on September 20th, 2015 at M-1 Challenge 61 in Russia. Delija will face the champion Marcin Tybura (12-1) and will be looking to bring that title back to Hrvatska. If Delija can score an impressive victory in this fight the UFC will have to take notice as he would be on a 6 fight win streak.

In boxing news Filip Hrgovic has brought home the European Amateur Super Heavyweight gold medal to Croatia. This is the first time since the legend Mate Parlov did it in 1971 and 1973. Hrgovic is a real talent and with more experience he could make some noise in the weak world heavyweight division that Wladimir Klitschko rules. 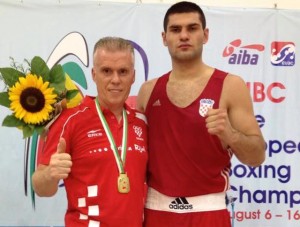