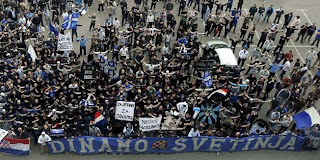 Hated Dinamo Zagreb general manager, Zdravko Mamić, stated earlier this week that as of April 12th, 2011, he will no longer be the executive vice president of the club and would like to extend the managerial hierarchy at Dinamo. As over 1,000 Bad Blue Boys peacefully camped outside of Maksimir, Mamić shared the news, extended his thanks to the supporters and released Dinamo’s financial numbers for 2010. Mamić explained that the club made a profit of 29,022,434 Kuna, approximately $5.7 million.

To top things off, Dinamo also received a name change this week.

Earlier this year, club management increasingly began claiming that Dinamo is the direct descendant of Građanski (which had been founded in 1911) and finally decided to append the adjective “Građanski” to the club’s official name this week, turning it into the present-day GNK Dinamo Zagreb (Građanski nogometni klub Dinamo Zagreb or Dinamo Zagreb Citizens’ Football Club) and announced a grand celebration of the club’s centennial. 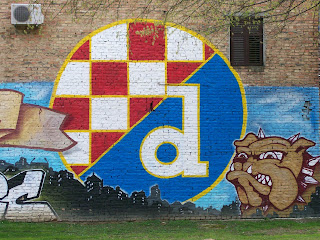 Građanski Zagreb (sometimes spelled Gradjanski or Gradanski), also known as 1. HŠK Građanski or fully Prvi hrvatski građanski športski klub (English: First Croatian Citizens’ Sports Club) was a Croatian football club established in Zagreb in 1911 and dissolved in 1945. The club was a huge influence on the development of football in Croatia and Kingdom of Yugoslavia and achieved greatest success in the period between the two World Wars.

In 1911, when Croatia was still part of the Austro-Hungarian Empire, Građanski was founded in Zagreb by Andrija Mutafelija and a few of his friends in response to rumors that a football club that was meant to play in the Hungarian football league (as opposed to the Croatian Sports Union) was about to be established. Građanski was therefore founded as a multi-sports club with a distinctly Croatian identity intended to cater to citizens of Zagreb, with sections dedicated to football, handball and cycling. At first they used grounds in Zagreb’s neighbourhoods of Tuškanac, Martinovka and Kanal, until they built their own stadium at Koturaška street, which was officially opened in 1924 by Stjepan Radić, a prominent Croatian politician.

The club lost their first game to city rivals HAŠK (5-1) but it soon became very popular and widely supported by the Zagreb’s working class (in contrast to HAŠK, which was an academic sports club and was seen as an upper class club affiliated with the University of Zagreb and its students). In following years, a healthy rivalry developed between the two city clubs, and after the Kingdom of Yugoslavia First League was launched on a national level in 1923, Građanski’s greatest rivals outside Zagreb soon became BSK Belgrade and Hajduk Split. During the 1920s and 1930s Građanski became the most popular club in Zagreb as they won five Yugoslav championship titles (1923, 1926, 1928, 1937, 1940 and were runner-ups in 1925 and 1939).

Dinamo Zagreb was founded on 9 June 1945 in order to replace the three very popular Zagreb football clubs (HAŠK, Građanski and Concordia) which had been disbanded by the Yugoslav Communist Party following the end of World War II. Dinamo then entered the Yugoslav First League in its inaugural 1946–47 season, finishing as runners-up. In their second season in Yugoslav top flight in 1947–48 they finished as Yugoslav champions which was their first major trophy. The club won three more league titles and seven Yugoslav Cups before they left the Yugoslav league in 1991 amid the breakup of Yugoslavia and formation of the Croatian football league system. Dinamo are the only Croatian football club who have ever won European silverware, having won the 1966–67 Inter-Cities Fairs Cup by defeating Leeds United in the final. They have also finished runners-up in the same competition in 1963 when they lost to Valencia.

Amid political turmoil in the early 1990s the club began claiming direct lineage to pre-WWII clubs Građanski Zagreb and HAŠK. In order to reflect this in June 1991 it was renamed HAŠK Građanski and in February 1993 it was renamed again and became Croatia Zagreb. In February 2000 it reverted back to Dinamo.