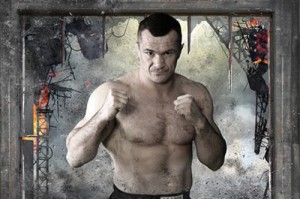 It wasn’t an easy road to the title tonight for Mirko by any means. In his first fight versus Jarel Miller, he looked his age and was bullied around the ring for three rounds. Filipovic was getting beaten up in the clinch but was able to survive and win the fight on the outside. The judges scored the win for Filipovic but it could of easily went to Miller.

In his second bout of the night, Filipovic faced Ukranian stand-out Pavel Zhuravlev. The Ukrainian defeated Catalin Morosanu in his opening bout. As soon as the fight began you could see a different Mirko Crocop than the one that showed up against Miller. The Croatian used his outside game to out-strike Zhuravlev. In the third round Mirko began to write his historic ending with a dominating round and almost secured the KO in the final minutes of the match. All three judges scored the decision win to Mirko “Crocop” Filipovic. This set the stage for a final match up with K1 superstar Badr Hari but it would not be on this night. It was announced that Hari had broken his leg in his quarter final win. Replacing Badr Hari would be Dzevad Poturak of Bosnia Hercegovina.

In the other semi final fight it would now be Dzevad Poturak versus Ismael Londt who defeated Hesdy Gorges via TKO. Londt made quick work of the Bosnian earning a TKO victory in the second round setting up the show down with Filipovic in the final.

In the final fight Londt came in as the favourite to be crowned the 2013 K1 Champ as he secured both victories by TKO and looked unstoppable. Filipovic had other ideas as he entered the ring to Duran Duran’s “Wild Boys”.

On this night in Zagreb, Mirko “Crocop” Filipovic would not be denied his dream of becoming K1 Champion. In the first round Mirko worked from the outside and used slick footwork to pepper Londt with punches. The first round was won by Filipovic 10-9. In the second round it was all vintage Mirko CroCop. The Croatian landed his legendary left high kick and dropped Londt early on. The rest of the round consisted of Filipovic attempting to finish the fight as Londt basically just tryed to stay alive. This round could of been scored 10-8 for the Croatian.

In round three Londt knew he needed to secure the KO to gain victory. Londt dominated the round as Filipovic just used his footwork and straight left to keep Londt at bay. All the pressure in the third by Ismael Londt wouldn’t be enough to deny the Croatian legend his first K1 title. All three judges scored the fight unanimously for Mirko “CroCop” Filipovic and giving him his first ever K1 Championship.

At 38 years of age and written off by many of the experts, Filipovic turned back time tonight in Zagreb. One can argue that Filipovic may have lost the first fight of the tournament and shouldn’t of even been in the finals, but you cannot argue that he won his final two bouts. The Croatian proved many wrong as he decisively won the last two bouts of the tournament against top K1 opposition and secured the championship on home soil. This win by Filipovic can almost be compared to the Wimbeldon win by Goran Ivanisevic. Just like Ivanisevic, Crocop was not given much of a chance to take the title as his best years were apparently behind him. Filipovic like Ivanisevic proved everyone wrong and showed the true Croatian fighting spirit. Congratulations to the legend: Mirko “CroCop” Filipovic.

What is next for the Croatian?