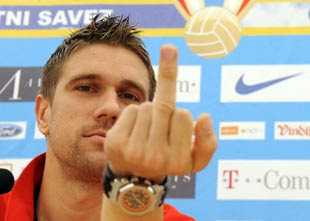 Ivan Klasnić, better known to most Croatian soccer fans as ‘Killer’, has just signed a 4-year deal with French club, FC Nantes. Nantes has just been promoted to France’s 1st Division for the 2008-09 season after finishing second in Ligue 2 last year. The exact terms of the contract have not yet been released.

Klasnić has been in Germany at Werder Bremen since 2001. He had a good career in Bremen scoring 49 goals in 150 matches. In January of 2007, Klasnić was diagnosed with kidney failure, underwent 2 kidney transplants after his body rejected the kidney from his mother, and did not play again until November of that year. He made an incredible comeback scoring 2 goals at Euro 2008; one of which should have put Croatia in the semifinals.

Klasnić still blames the Werder Bremen doctors for not diagnosing his kidney problem earlier. They also did not release Klasnić to play after the second successful transplant because of the expected strain it would put on his body. Ivan consulted others doctors who ultimately gave him the green light.

Pictured above is a jubilant Ivan Klasnić at a Euro 2008 press conference when asked if he would return to play for Werder Bremen after the emotional rollercoaster they put him through. I’m sure no translation will be needed.