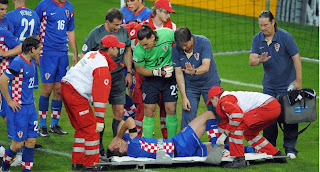 Dario Knežević will not play again in Euro 2008. He has strained ligaments in his left knee after a collision with backup Croatian goalkeeper, Vedran Runje, early in the first half of the Poland game.

The collision looked tame at first, but when seen in slow motion replay, you could see Knežević’s knee buckle and lock up just as a knee was not built to do. It could have been much worse as he has only strained it. No surgery will be necessary; but this is obviously saddening to Knežević as he played in all 3 group games and Bilić was liking his progress.