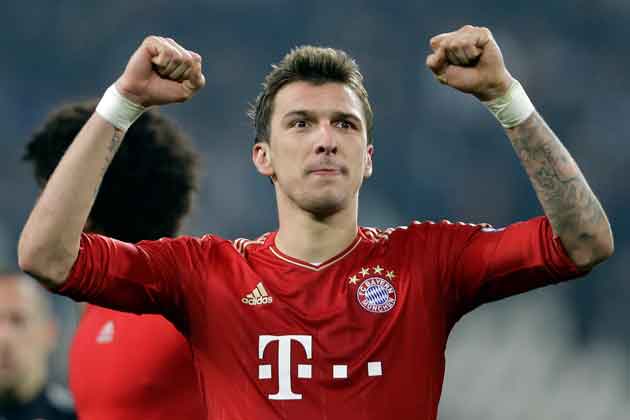 The man may not send a rocket from outside the box into the back of the net or dribble past three defenders in Messi-like fashion. But what ‘Super Mario’ Mandžukić is doing in his two seasons at Bayern Munich is simply “getting the job done.”

The ‘Red Baron’, as he has been dubbed in Germany, poaches goals in front of the net and heads home crosses like no other striker in the world at the moment. However, he’s been criticized by some for being one-dimensional and only being able to score from within six yards.

But just like a 7-foot center in basketball who’s not paid to put up 3-pointers, Mandžukić isn’t being paid to do anything but set up in front of goal.

And the numbers don’t lie.

Super Mario is currently tied atop the Bundesliga scoring table with Borussia Dortmund’s Robert Lewandowski (17 goals), who ironically could be replacing Mandžukić next season at Bayern. But remember, Bayern clinched the Bundesliga title two weeks ago and have been playing quasi-friendly matches; resting starters as they prepare for Real Madrid in the Champions League semifinals.

With four matches remaining in the season, Mandžukić very well may end the campaign as the Bundesliga scoring champion. But should it be looked down upon; as he receives some of the best service in Europe from arguably the best club?

It shouldn’t matter. Mandžukić has proven that he can get the job done in any situation, in any game. The man has been on a mission since scoring three goals at Euro 2012. He followed up that performance with a fantastic debut season with Bayern, scoring in the Champions League Final last year before netting 17 times in 2013-14. He also has three goals and three assists in Champions League play this campaign.

And he’s not even finished yet.

Bayern take on Kaiserslautern Wednesday in the DFB Pokal semifinals. Manager Pep Guardiola will make a run at a second consecutive Europe treble, and let me make it known, it won’t be without Mandžukić being a part of the action. Robben, Ribery and Schweinsteiger might be the technical flash that Bayern require, but Mandza is the blue collar work horse that always gets the job done.

He may be turning into the aerial Ivica Olić, but with the résumé Mandžukić has built, who cares?