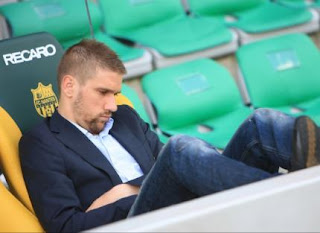 Dinamofan reporting from Bolton, UKJust back from Bolton and I have to say I was disappointed with Ivan Klasnić’s whole attitude. Putting football totally aside, there was something wrong with his whole body language. He was given the start Saturday in a FA Cup clash vs. York City,but Killer had to have been either ill or was having a bad reaction to the weather because he had a big bulky coat on in the warm-up and didn’t move hardly at all in the game. Other than a couple of neat touches, he had his head down nearly the entire time, even when Bolton were attacking. Klasnić seemed frustrated when teammates played the ball anywhere he might have to run to.

I suspect some personal problem as I can’t even get on to his standard of play. His mind was completely somewhere else. There was even a moment where he gave teammate Tamir Cohen a massive hug (who was just back after his father Avi Cohen, an ex-Liverpool and Rangers defender, died in a motorcycle accident). It seemed almost like Klasnić was affected by the tragic news; not interacting with others. Sad to give a report like this on one of my all-time favorite Croatia players, but he went off at half time and the three that came on, Kevin Davies, Johann Elmander (who both scored) and Matt Taylor all looked a class ahead of the guys that started. Maybe it was due to a Cup match vs. a 5-tier team, but Klasnić may not see much more football this season at Bolton if he keeps this up, especially if Arsenal’s Carlos Vela arrives. 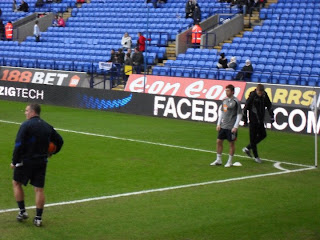 A DEPRESSED KLASNIC (R) DURING WARM-UPS

Klasnić’s strange mood seemed to be an ‘off the field problem’ or unhappiness at the arrival of striker Carlos Vela. On top of that, Davies, Rodrigo and Elmander all worked 10 times harder than Klasnić did on Saturday. I can only express my disappointment in Klasnić’s attitude. To put it simply, he wasn’t hunting and we all know that Klasnić normally hunts for goals. On Saturday, his brain was in another place.