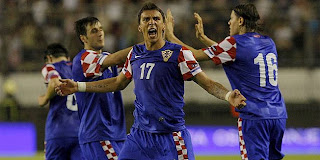 It only took one shot from Georgia in March to defeat Croatia 1-0. Well, the Georgians nearly did it again in June. With Croatians worldwide knowing not to take this Georgia team lightly due to their stubborn bunker, the Croatian national side came out firing in the opening minutes in front of a jam-packed 28,000 capacity Stadion Poljud in Split. The fans stayed quiet for the first 14 minutes of the match to silently protest Split not hosting a qualifier in 14 years. A tremendous roar could finally be heard as the game clock hit 14:00, with flares being lit, delaying the game less than one minute. The Croatians fans were finally feeling the big game atmosphere in Split, only to have the Georgians suck all the air out of the stadium three minutes later with a J. Kankava header from six yards out. Darijo Srna and Mario Mandžukić got tied up on defense giving Kankava a run-up header, which he struck into the corner of the net. There was nothing goalie Vedran Runje could do. Croatia went into halftime losing 1-0 as Luka Modrić’s shot halfway through the period went off the right post.

As panic and disappointment started filling Croatian minds worldwide, manager Slaven Bilić took off an unproductive Nikica Jelavić at the start of the second half in place of Nikola Kalinić. Croatia controlled ball possession for 67% of the match but couldn’t catch a break on scoring a goal. Eduardo received an open header in the second half and ‘stoinked’ it off the crossbar. It looked as if it would be another disappointing result for the Vatreni.

In the 71′, Bilić took off Ognjen Vukojević and Ivan Perišić for the likes of Tomislav Dujmović and Ivan Klasnić, in a last gasp effort to get some goals on the board. What a beautiful decision it was as Klasnić and Dujmović played ‘give n’ go’ in the box to set up a close range shot from Mandžukić for the equalizing goal in the 76′.

It only took Croatia two minutes after the equalizing goal to score another as Eduardo slotted a beautiful pass in the box to Nikola Kalinić, who toe-poked home the winner in the 78′ from the middle of the box. For good measure, Srna hit the bar after the go-ahead goal to make it three hit posts for Croatia on the day. With the win, Croatia go ahead of Greece, who play Malta tomorrow (June 4).

Croatia ended the jinx at Poljud with this 2-1 win over Georgia, however, they celebrated as if they won the World Cup. Croatia should be happy that they won, but why should they be happy? Gained an important 3 points? Got the result with half the team missing? Come from behind win? 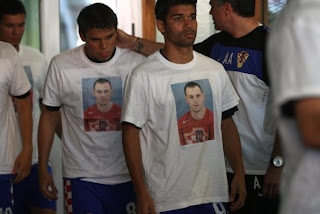 All Croatian players wore Drago Gabrić shirts under their jerseys in support of their teammate. Gabrić fell into a coma after running his car through a guard rail near Split. There was no foul play reported in the incident as rainy road conditions were the main culprit. Gabrić has since woken up from the coma and should make a full recovery.