Nikica Jelavić played the full 90 minutes for Rangers on Saturday and converted a 69th minute penalty kick against Aberdeen to give the Scottish giants the full three points on the day. Jelavić put a tough ball through the box as he slid across the penalty area which followed with a foul and a Rangers penalty. Jelavić stepped up to the spot and cooly shot the ball straight down the middle of the goal to put Rangers up 2-0. Aberdeen scored in the 82nd, but it was not enough of an impact to knock off Rangers. Rangers now hold a nine-point lead over second place Motherwell and an astounding 12-point lead over Scottish rivals Celtic.

Nikola Kalinić scored for Dnipro in just the third minute of play Sunday in a 2-0 win over Karpaty. Kalinić was left wide open in front of the net to easily tap in a cross in ‘Ivica Olić’ fashion. With the win, Dnipro climb to fifth position on the Ukrainian table and should battle for a Europa League berth once again this season. Ivan Strinić was left off the squad and has been listed as unavailable for the two Turkey matches. Will Vedran Ćorluka play left defense come November? 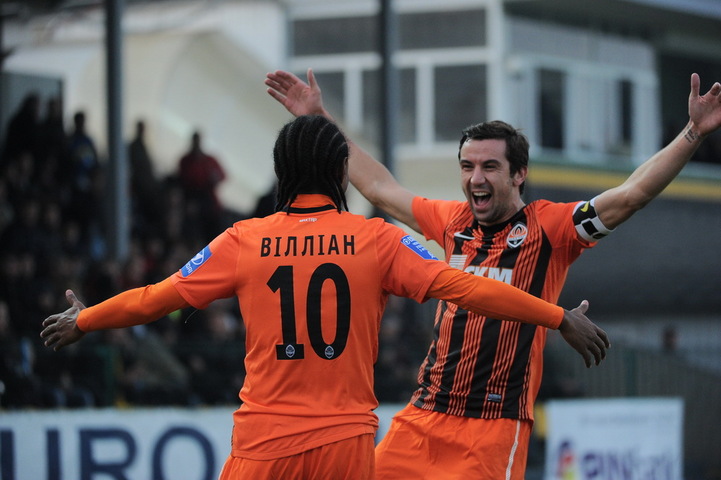 Srna (R) gives a big hug to Willian after the win

Darijo Srna played the full 90 minutes for Shakhtar in their 3-2 win over Oleksandria on Saturday. With the win and a Dynamo draw, Shakhtar now find themselves one point behind leaders Dynamo Kyiv on the table halfway through the season. Eduardo remained on the bench as an unused substitute as he will surely be used this week in Champions League play when Shakhtar travel to Russia to take on Zenit St. Petersburg.

Ognjen Vukojević played the full 90 minutes in a heated 0-0 draw against Tavriya. The match consisted of 14 total yellow cards and two red cards for Dynamo. Current Ukrainian leaders, Dynamo, were fortunate to escape Tavriya with a point after their undisciplined performance. 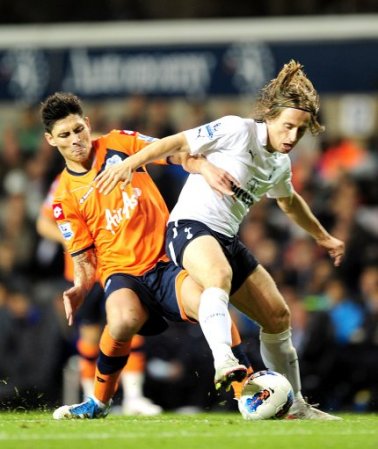 Luka Modrić got the start for Tottenham and played the full 90 minutes for Spurs in a 3-1 win over QPR on Sunday. Modrić did not directly contribute to any of Tottenham’s goals but he was given an ‘8’ grade from SkySports.com for being a ‘joy to watch’. Modrić’s soft shot early in the first half found the feet of teammate Rafael van der Vaart, who couldn’t take advantage of the situation with his shot being blocked by the Queens Park goalie. Modrić has been in good form and should be ready for the Turkey encounter in two weeks. Tottenham have not been defeated in their last seven Premiership matches and currently sit tied for third place in the English table with Chelsea and Newcastle United.

Niko Kranjčar and Vedran Ćorluka were left off the squad due to injury. Kranjčar has been confirmed unavailable for the Turkey duel in November.

With Swansea City up 2-1 in the 76th minute on Saturday, Ivan Klasnić was substituted into the game for the Bolton Wanderers. Klasnić could not give Bolton the result they were looking for as he did not manage one shot on goal. Swansea eventually scored one more goal to make it a 3-1 victory. With the loss, Bolton remain in the relegation zone with only six points through the first 10 games of the season. Klasnić has cooled down after a hot start to the campaign.

Wolfsburg came back from two deficits on Saturday, but failed to come back for a third time to fall 3-2 against Hertha Berlin on Saturday. Super Mario Mandžukić started and scored his seventh goal of the season, equalizing Berlin’s opening goal from Raffael in the 27th minute. Mario played a nice give and go with Ashkan Dejagah to pull out Hertha keeper Thomas Kraft and the former Dinamo Zagreb striker put the ball into the back of the empty net. Wolfsburg pushed forward in the last five minutes in search of a third equalizer, but ran out of time and registered their sixth Bundesliga loss of the season.

Andre Mijatović started and played the full 90 minutes for Hertha Berlin. The 31-year-old defender was happy to escape Wolfsburg with the three points.

“The key to our win was passion! We believed in us until the end and showed absolute determination. That was an emotional game, a great win for the spectators. Ultimately, we are super happy and go home satisfied.”

The Croatian dynamic duo of Ivo Iličević and Mladen Petrić was missing on Sunday in Hamburg as HSV squeaked out a 1-1 draw against Kaiserslautern.  Mladen will be out three to four weeks with a thigh injury and will be forced to miss Croatia’s two legged playoff tie against Turkey. “We were in a three-on-three scenario [in training], when he felt a twinge in the calf,” said Hamburg coach Thorsten Fink.  Hamburg forward Ivo Iličević will also be sidelined three weeks after tearing a thigh muscle in practice. However, German media has reported that Ivo might be fit in time for Croatia’s showdown with Turkey.

Köln redeemed themselves after a disappointing DFB Pokal exit to Hoffenheim on Tuesday with a 3-0 win over Augsburg on Sunday. Mato Jajalo was looking for a Bundesliga goal to add to his DFB Pokal goal against Hoffenheim. The 23-year-old midfielder started and played 73 minutes for Köln, but failed to get on the scorers sheet. Has Mato done enough to  start for Croatia against Turkey?

Business as usual for Bayern Munich this week as they strolled to a 6-0 DFB Pokal win over Ingolstadt on Wednesday and a 4-0 Bundesliga win over Nürnberg on Saturday. Ivica Olić came off the bench at the hour mark on Wednesday to assist on Usami’s goal in the 90th minute. With the score at 4-0, Ivica came on in the 76th minute of play on Saturday and finished the game without a shot on goal.

Ivica is slowly starting to get back in to the flow at Bayern Munich. However, with the Bavarian Giants star power, it looks like Ivica would have to settle for a bench role if he were to stay until the end of the season. Ivica chose his words wisely after being asked about a possible winter transfer:

“I appreciate every minute I play. After a long-term injury, match practice is important. I cannot speak about anything else, I must be careful with what I say.”

Bayern Munich appear ready to sell Croatian defensive midfielder Danijel Pranjić in the winter transfer window. The 29-year-old, former Dinamo Zagreb midfielder has yet to see the pitch for Bayern Munich in the Bundesliga this season. Bayern manager, Jupp Heynckes, has allowed Danijel to look for a new club for a possible winter transfer.

“Normally I’d only let a player leave in January over my dead body. If Danijel wishes to leave, though, he can.”

Borussia Dortmund missed their chances and had to settle for a 1-1 draw at Stuttgart in front of 60,000 fans at Mercedes-Benz-Arena on Saturday. Ivan Perišić started and played 76 minutes for the reigning champions. The former Hajduk Split midfielder had a couple of half chances on goal in the early stages of the game, but nothing to rattle Stuttgart keeper Sven Ulreich. With the draw, Borussia Dortmund slipped to third in the Bundesliga.

Olympique Lyon redeemed themselves from last week’s disaster in Lille with back to back wins over Saint-Étienne this week. On Wednesday, Lyon put on a convincing performance in Coupe de la Ligue, beating Saint-Étienne 2-1 at Stade Geoffroy-Guichard. Dejan Lovren started and played the full 90 minutes for Lyon in the win. The former Dinamo Zagreb defender was at fault for the lone goal after failing to get in front of a Saint-Étienne cross that found Pierre Aubameyang unmarked on the far right side.

On Saturday, Dejan Lovren and Lyon overcame a Mouhamadou Dabo red card in the 52nd minute and scored twice in the final ten minutes to shutout Saint-Étienne at Stade de Gerland. Dejan started and played solid for 90 minutes in the shutout. Olympique Lyon picked up two points on Lille in the fight for the final Champions League spot.

SkySports reported on Thursday that Dejan Lovren would be sold by Lyon for the right price. Lyon are going through some tough times financially and could be forced to sell the former Dinamo Zagreb defender. Lovren’s agent, Nikky Vuksan, revealed on Thursday that several Italian and Spanish clubs have expressed interest in his services. Liverpool have shown interest in the past with Daniel Agger’s injury problems a constant concern and Jamie Carragher’s career coming to an end. Lovren is signed for Lyon through June 2014.

“I know that many European clubs, including a few Italian and Spanish teams, have made enquiries about the player but so far none of them has made concrete steps or submitted bids. Lyon are going through a difficult time from a financial point, but we’re also talking about renewal. I think that if we were to get a good offer, then the club would evaluate it.”

With Stipe Pletikosa out, Rostov drew at Kazan 1-1 on Friday. They sit in 10th with one game remaining before the playoff phase. Stipe is still expected to be back in time for the Euro 2012 playoffs. Rostov play last placed Tom Tomsk at home next Saturday.

Ivan Rakitić came on in the 74th minute in Sevilla’s midweek draw against Racing Santader.  His cross was found by Manu in the 92nd minute to equalize and extend their unbeaten run. Sevilla plays at home against last place Granada on Monday. Despite being one of two undefeated teams in La Liga, a win would only leave them in 5th.

Mate Bilić has taken advantage of limited playing time at Sporting Gijon, and has 2 goals in his last 2 appearances. On Wednesday, he came on after halftime against Mallorca with the team down 1-0 and helped them comeback in the 49th minute when he headed in Alberto Lora’s cross at the far post. They would score on an own goal in the 65th minute and win 2-1.

With Sporting trailing 1-0 on Sunday to Athletic Bilbao, Mate was called on again to save the day. He was subbed on in the 65th minute, and would equalize 6 minutes later. His shot from 30 yards took a deflection off of David Barral’s calf and found it’s way around the keeper.