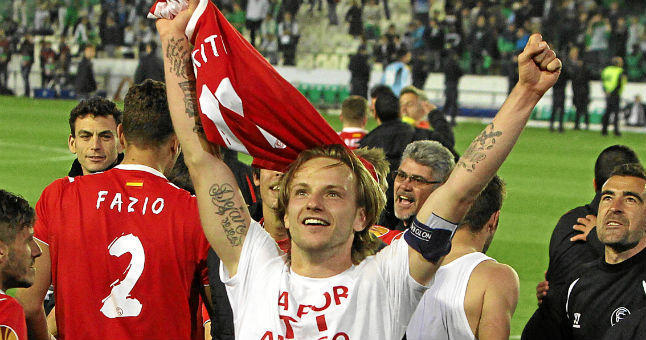 Ivan Rakitic scored his 12th goal of the season on Sunday as Sevilla beat Espanyol 4-1 to keep their Champions League hopes very much alive. Rakitic was brought on in the 62nd minute after playing midweek, and was quiet until the goal in the 89th minute, where he gathered Nico Pareja’s long pass and finished into the corner of the net. Sevilla are now just three points out of fourth place in La Liga as six matches remain, although Athletic Bilbao has a game in hand. 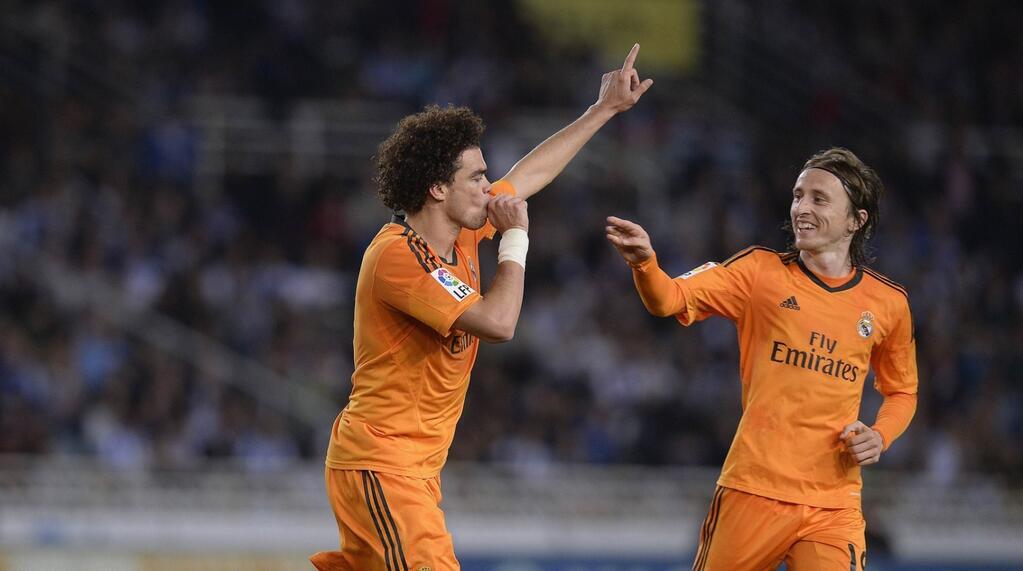 Luka Modric played the full 90 minutes for Real Madrid on Saturday as they easily swept aside Real Sociedad in a 4-0 win. Modric had two shots, created two chances, and completed a total of 63 passes. With six matches to go, Real are two points behind Barcelona and three behind Atletico Madrid.

Eduardo took home “Man of the Match” honors Saturday as he scored two first half goals in Shakhtar’s 3-0 win over Karpaty. The first came off a sharp Darijo Srna corner kick in the 12th minute as Dudu battled through the box to head home from six yards out. Eduardo did it again two minutes from the halftime whistle when the Karpaty defense opened up like the Red Sea, letting the Brazilian-born Croat take a wide open shot from six yards out following a pass from the side. He was subbed out in the 69th minute as captain Darijo Srna played the full match.

Eduardo is making a run at a World Cup starting spot vs. Brazil at the right time. He has scored three goals in the past two Shakhtar games. With Mario Mandžukić out against the hosts, would you rather see Ivica Olić or Eduardo play striker against Brazil?

Nikola Kalinić came off the bench at halftime for Dnipro and converted a 54th minute penalty to make it a 2-0 win for his side as they battle for the Ukrainian Premier League crown. Kalinić cooly guessed right, sending the keeper the other way, assuring that Dnipro would remain three points behind leaders Shakhtar for first place. Kalinić has done little to none for a Dnipro team that is vying for a Champions League berth. He never blossomed into the player he was promised to be; and at age 26, it may not happen. Defender Ivan Strinić was not on the squad after playing the full match in last week’s win over Shakhtar. It is unknown when he will return.

Both Domagoj Vida and Ognjen Vukojević played 90 minutes for Dynamo Kiev in a 4-2 win over Metalist Kharkiv. The win keeps Dynamo five points behind leaders Shakhtar for first place. Vukojević picked up a second yellow card in injury time and was sent off. Both players are expected to come off the bench for Croatia in Brazil.

Dejan Lovren and Southampton weren’t expected to defeat mighty Manchester City on Saturday, but it went from bad to worse when star striker Jay Rodriguez was taken off in the 27th minute with a serious knee injury. After Man City went up early, Southampton would equalize through a penalty in the 37th minute to make it 1-1. However, it was all City thereafter as they would score two goals seconds from halftime and add another one late in the 4-1 win. Lovren was busy with the Manchester attack all day long and did not defend Bosnian Edin Dzeko properly on his 45th minute header strike.

With only five matches remaining in the season, Southampton will end their campaign in the top half of the table knowing they had a successful Premiership run after being promoted last year. Lovren has been a rock at defense and should get some offers from bigger clubs in the summer. 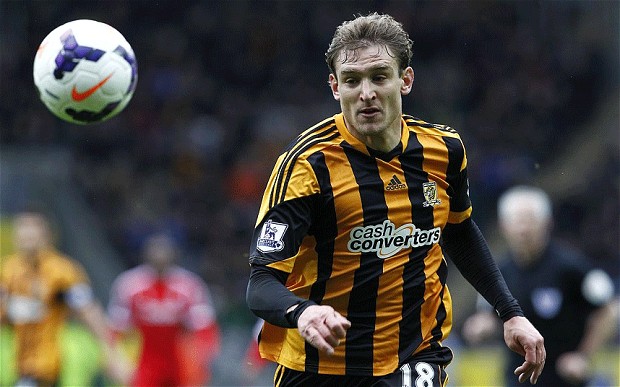 Nikica Jelavić had a quiet day for Hull City Saturday in their 1-0 win over Swansea. He managed three total shots (1 on goal) while running all over the pitch in Ivica Olić-like fashion. He was given a ‘6’ grade from SkySports.com as he “ran himself to a stop.” Jelavić hasn’t delivered the way he should have at Hull, but with the win, will avoid any chance of relegation as Hull are 90% to play in the Premiership again next season.

Borussia Dortmund put a dent in Wolfsburg’s Champions League hopes after coming from behind to register a 2-1 win on Saturday night in Dortmund. Ivica Olić started and played the full 90 minutes for Wolfsburg in the loss. The former Dinamo Zagreb striker hit the post twice in one second and then scored a-typical-Ivica-Olić-like goal in the 34th minute of play. Ivica scored his 11th Bundesliga goal of the season and finished the match with five shots.

Ivan Perišić also started and went the distance for Wolfsburg in the loss. The Croatian international had a decent game but couldn’t reach the back of the net on three shots. Wolfsburg will need a fine performance from their final five Bundesliga games to have a shot at Champions League next season. Luckily for Wolfsburg, they end the season with a kind schedule.

Despite holding a 68% possession advantage, Bayern Munich’s 53-game unbeaten streak in the Bundesliga came to an end by Bavarian rivals Augsburg, who won 1-0 at the Augsburg Arena on Saturday. Former Dinamo Zagreb striker, Mario Mandžukić, started and played the full 90 minutes in the loss and only managed two shots. Mario was frustrated by a pesky Augsburg defence and found it difficult to break free inside the box. Bayern will face Manchester United in the second leg of the Champions League quarterfinals on Wednesday in Munich.

Hamburger SV picked up a much needed three points by registering a 2-1 win over Bayer Leverkusen on Friday night in Hamburg. Former Dinamo Zagreb captain, Milan Badelj, started and played only 33 minutes and had to be subbed out because of an injury. The Croatian international will be out at least two weeks as he recovers from a thorn thigh muscle. Ivo Iličević was left off the roster sheet by Hamburger SV. No word on his status.

It has been that kind of a season for Hamburger SV 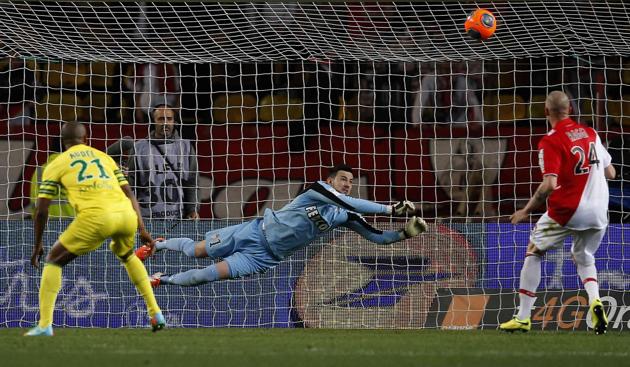 Danijel Subasic was in net on Sunday for AS Monaco’s 2-1 home victory over Nantes. Subasic made a couple nice saves (3 total), including keeping out what looked to be a certain goal from Itey Shechter. He was lucky to avoid conceding a penalty shortly after halftime when he appeared to trip Serge Gapke in the area. Monaco remain second in Ligue 1, trailing leaders PSG by 13 points with six games to go. 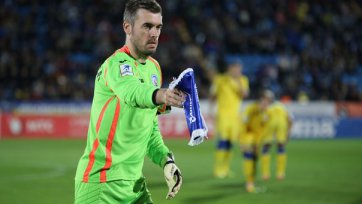 Stipe Pletikosa missed his first Russian Premier League match with FC Rostov in two and a half years, as he sat out their 2-0 win over Kuban Krasnodar with a hip injury. Rostov moved up to a tie for seventh, six points out of European positions with six matches to play. 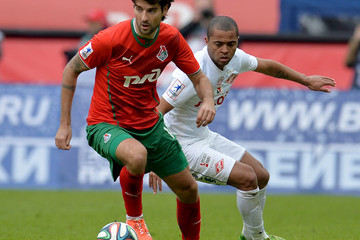 Mateo Kovačić came off the bench for Inter in the 53rd minute and played well in the 2-2 draw against Bologna. The former Dinamo Zagreb midfielder finished the match without a shot as Inter controlled 65% of the total possession. Has Mateo done enough this season to start for Croatia in Brazil?

Marko Livaja came off the bench in the 78th minute and failed to register a shot for Atalanta in a 2-0 loss to Sassuolo on Sunday. Josip Radošević didn’t make the trip to Parma on Sunday in a 1-0 loss. Tin Jedvaj was left off the squad by Roma in a 3-1 win at Cagliari on Sunday. Šime Vrsaljko and Genoa host Milan on Monday.

Former Slaven Belupo defender, Igor Bubnjić, started and played 58 minutes for Udinese in a 2-1 loss at Fiorentina. Igor played well and wasn’t at fault for the goal. The Croatian international managed to register a shot and committed only one foul. Former Dinamo Zagreb keeper, Ivan Kelava, looked on from the bench for Udinese.

Reports from Italy suggest that former RNK Split striker Ante Rebić looks set to miss the rest of the season for Fiorentina. Ante has made only three appearances for Fiorentina this season, coming off the bench all three times and totalling 91 minutes of action. The 20-year-old will hope for better days next season.